Do you wish to hear pure fiction or do you need some hard facts?

I know of very few who would ask the question – ‘How fast is a motor car?’ or ‘How much water does a water pump deliver?’ but it is reasonable to ask ‘How fast is the latest Ferrari?’ or ‘How much water does an Aquatronic 2000 water pump deliver at maximum output?’ It’s simple to get answers for the last two questions by contacting the companies who manufacturer these items who will have full test figures for their own products and model ranges. However, it is absolutely impossible to generalise here unless a particular model is specified in the original questions.

A Japanese Koi breeder may well estimate honestly that one of his Koi will reach 85cms in later years but that is only based on his own methods of keeping and his available facilities. I can assure you that the same Koi will not achieve this length if kept in a bathtub some 6,000 miles away no matter how perfect the filtration system is.

As to being able to state the maximum performance in water volume terms of a ready-made filter box for a Koi pond we are now in the wildest realms of generalisation possible.

As I have already mentioned, the pond base dimensions and the efficiency of bottom drain/s have a major influence on the answer to this but we should now really add a few of the other enormous variables that all contribute to this impossibility such as: –

Stocking rates and periodic variations to these.
Food quantities.
Food make-up – (how much is digested and how much is given off as waste)
Water temperatures.
Water return currents.
Algae – natural peaks and troughs.
Seasonal additions of increased mechanical debris.

As far as the specific biological capabilities are concerned on the ERIC FOUR unit,I have no doubt that the surfaces will cope with over 12,500 gallons of water on an ‘average’ pond.

However, this is not really worth considering if we are talking ‘proper performance’ because there is also the fact that it is unreasonable to even hope that a single bottom drain to a single 4” outlet, perfectly sited on the best possible pond base will provide more than 5,000 gallons of pond water volume at a supply rate of 2,000gph to ANY filter box for ‘perfect processing’ if that pond holds 50 Koi of 60cms.

By adding another 4” outlet to the same drain and taking this to an identical filter box to double the water supply at the same flow rate to both mechanical and biological filtration stages then we have increased the overall performance possibilities considerably.

Add another 4” outlet to the same drain sump and another identical filter box then the same performance is increased by a further 50% – and so on.

Reduce the stock of Koi in the same pond to 17 or so and a single filter unit will more than suffice at the same flow rate!
Can’t we just instead simply accept the fact that to generalise on the performance capabilities of ANY ready-made filter box is little more than taking the wildest of guesses grabbed straight out of the air?
But still today the majority of Koi enthusiasts asks this question for a yardstick as to ‘How much water a box will process’.

A wise supplier will not make any performance claims unless he first finds out the requirements of a particular Koi keeper and his/her particular pond.

Failing that, ‘A Significant Under-Exaggeration of Performance’ whilst keeping reserves in mind for the future is always the best route to take in order to satisfy the majority of all situations!

In earlier texts I have given advice regarding a daily 10 second flush of the mechanical stage but this is pure generalisation for an ‘average pond’ with an ‘average stocking rate’ but of course there is no such ‘average anything’ where Koi ponds are concerned. On the other hand, if the same pond is stocked with a truly incredibly high quantity of Koi then two 20-second flushes per day or more may well be required!

So instead of timing flushes, it is far better to dump the entire unit on a daily basis or flush the lavatory completely. The largest Eric Four unit can be discharged entirely and re-filled from ‘pump off’ to ‘pump back on’ in just a little over one minute providing the 4″ bore discharge to waste is not reduced. The level drop in the pond is hardly discernible and the filter is ‘brand new’ on a daily basis.

As if all of this is not difficult enough to accept, how about we throw into the equation another FACT, which is that the biomass produced that reproduces and dies in its billions on the surfaces of the media is a LIVING THING without doubt! This living body relies purely on the ammonia content of the incoming water for endless supplies of food and whilst it is not exactly ‘fragile’ it is not exactly ‘bomb-proof’ either. It would be the words of a fool to attempt to give any ‘guarantees’ on any living thing but we must accept that seasonal water temperatures and variations in food intake of the Koi can both stretch the available surface colonisation as it can also decimate it by a great reduction of food supply. Whist the latter is not so much of a problem it is vital we have more than enough surfaces in our biological stage to cope with the dissolved ammonia at the highest concentrations in any given year.

I suggest that all ERIC boxes operate on flow rates that turn over the water volume in question once every two and a half to three and a half hours as a very ‘rough’ guide.

These are only four examples from several thousands of real-life possible situations/variables and, in truth; each one can be and needs to be tailored individually to produce optimum performance. In order to save your time, frustration and confusion in this respect, please contact me by email and I will give genuine advice as to the best possibilities for your own pond and ERIC filter system.

Some further Food for Thought.

‘The Old Guard of Koi’ still professes even today that any Koi pond filter system should hold at least around 25% to 33% of the pond volume. As to where they got these percentages from and, more to the point, whom they got them from is another question altogether? Many still harp on as to the importance of ‘water changes’.

It does not take much intelligence to see that these large and deep multi-bay filter units really only contain stagnant water conditions for much of the space taken up inside. The actual water flow passing through these boxes (for what it’s worth) hardly disturbs the surrounding areas where the detritus settles and builds up on a daily basis. In truth, these giants also need a complete flush to waste every 24 hours but this can take up an entire day before the pumps can be switched on again after huge volumes of new and costly mains water have been added! The so-called ‘block-built’ rise & fall chambers of old need to have a major reduction in depth and width – not to mention the removal of all ‘rise and fall’ divisions which merely produce ‘tracking’.

NOW is the time for a very serious re-think of these ancient and dangerous beliefs.

Eric systems concentrate the large volumes of incoming water flow and coerce this volume into a narrow and shallow container in order to trap detritus and then process the flow biologically. In percentage terms Eric units usually only make up around 2% to 3% of the total pond volume!

This shows the actual ‘filtration-only’ area space taken up with six Eric Four filter units that are required to process a substantial 25,000 gallons (113,500 litres) of pond water. 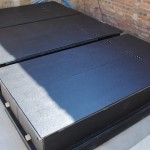 Total outer dimensions are 3 metres by 2.1 metres by 0.55 metres deep. This means that only 3.5 cubic metres of soil needed to be excavated to install them!

Daily discharge means the operative merely has to bend over to move the standpipes.

A FULL daily discharge of all six units takes only six minutes and means that 660 gallons (3,000 litres) is thrown away which represents only 2.64% of the total pond volume.

The Japanese breeder’s Koi are kept in indoor systems for 9 months of the year. The 4” bore drains from the pond and the 4” bore drains from each filter unit are religiously flushed to waste daily. In early June when their stocks are placed in the field ponds, the systems are steam cleaned to become spotless and brand new again at the end of it all and then left to dry for 90 days or so. This is the main reason as to why Shimi and Hikui are seldom seen in these indoor systems.

‘Complex Simplicity’ – now check out how many other filter manufacturers explain exactly how their systems operate in this kind of detail.

Eric systems are for serious Koi enthusiasts – they have no competition from anywhere!

A final word here, for the last three decades or so, I cannot recall how many times I have said or written a now-famous statement of mine which is: –

‘The cheapest possible way to build a Koi pond system is to do it ONCE – BUT – do it PROPERLY’.

Of course, the advice is seldom taken to heart seriously for several reasons – some believe they can do things much better themselves; others wish to cut corners; others ‘economise’ by purchasing cheaper but also inferior items that turn out to become very expensive later; it is also a ‘human thing’ that we often prefer to learn from our very own mistakes. In recent years the misinformation spouted by many self-styled armchair filtration ‘experts’ on Internet Koi forums, more often than not – simply beggars belief!

In the minefield that is Koi pond filtration systems available all around the world, the newcomer is quite rightly confused and there’s little wonder why!

Then there are the many others who have realised that they have ‘purchased a pup’ but continue in silence still with ‘buyer’s remorse’ nagging at them constantly. Some even rave about and even recommend their ‘pup’ to others!

I am regularly accused of saying there is only one way to go about things regarding Koi pond design and filtration whilst others tell me there’s more than one way to skin a cat. Of course there are thousands of ways to go about things, trust me – I’ve probably done most of them and probably have all the tee shirts.

But still there’s really only ONE ‘proper’ WAY!

…alas, many out there know that this is not even NEARLY close to the truth of it all!