16/05/10 – ERIC filter installation on an existing Koi pond near Gibraltar.

This 14,500-gallon pond (66,000 litres) had been running for some years but the owner was unhappy with the skin condition of his Koi stocks.

The pond itself was good, built from concrete and laminated with glass fibre, however the drainage design could have been better. 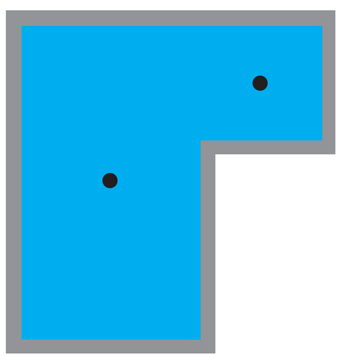 This is the drain layout of the system, the one on the top left was perfect and could easily handle the 3,000 gallons of water but the lower drain had to cope with an enormous pond base area and 11,500 gallons of water. 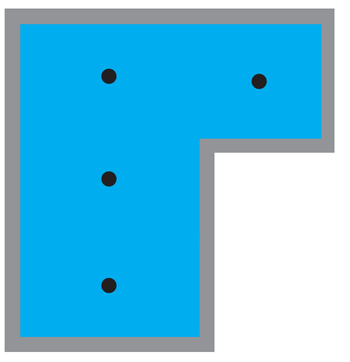 Had the pond been built from scratch, this is the drainage layout that should have been opted for. By doing so, each of the three drains in the main area would handle 3,800 gallons of water and also give perfect vacuum effect to the entire base of the pond. 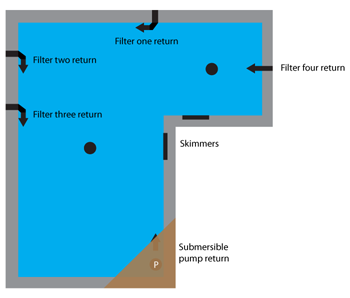 However, the situation was there and so the only way to increase performance and base coverage in the main area of the pond was to split the 4” line from the single central drain into three separate lines and feed them into three separate units whilst the other drain could be taken directly into one unit as before.

This sketch shows the plan and the method of adapting the existing return lines. A larger diameter drain top was made to replace the existing one and a submersible pump would be used to produce more anti-clockwise current to the lower part of the pond as is shown.

Fortunately there was other water available to house the Koi whilst the existing units could be removed and the new units could be installed. As usual Matt Cameron (who keeps telling me he knows more about ERIC filters than I do!) from www.thekoiplace.com flew to the owner’s home to do all this after I had arranged road delivery of all items in advance. The ERIC filter units were made and fitted out with the metric fittings as used on mainland Europe as opposed to ‘BSP inch’ fittings favoured in the UK. 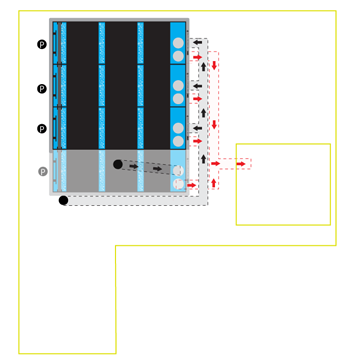 All waste lines were taken into the existing discharge box via a single 110mm line as shown here.

The flow rate through each of the four rivers is 1,550 gallons per hour (7,000 litres). This produces a total pond turnover approximately of once every 2.5 hours. 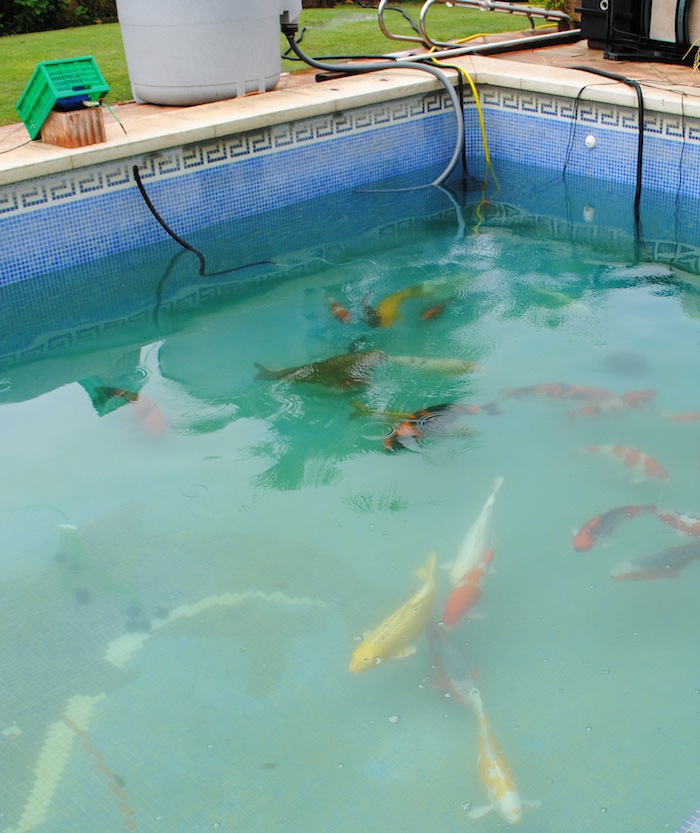 The Koi were housed in the swimming pool that had been thoroughly cleaned beforehand and temporary filtration added whilst they spent a few days in this water. The water used was pumped into the pool directly from the Koi pond. This allowed the necessary work to be carried out on the bottom drain modifications. 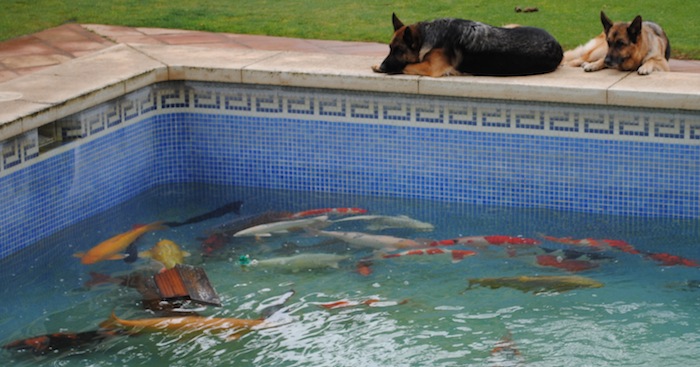 Matt then employed a local security company to keep watchful eyes on the Koi whilst he was busy elsewhere in the grounds. 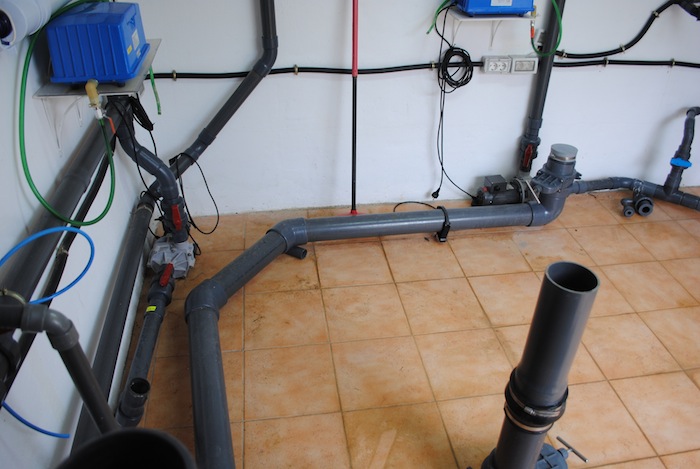 The remaining old filter equipment was removed from the filter house in preparation for the ERIC units. 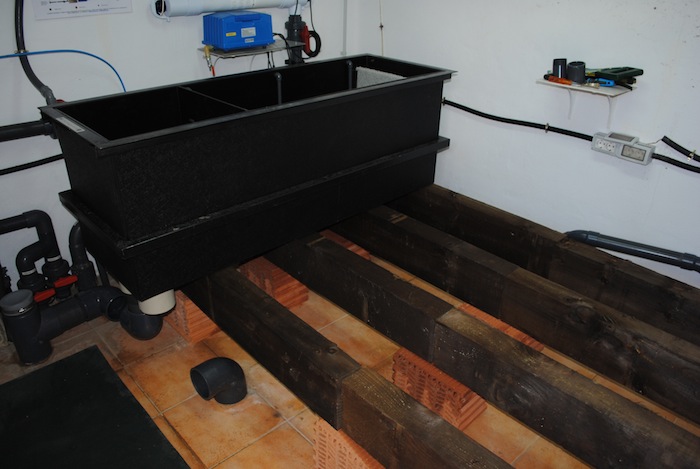 As ERIC units are much shallower than other filter systems around today, in this installation, staging was made with timbers as shown.

This allowed Matt ample space below to make up the necessary pipe work assemblies and connect directly into the units from below.

This shows a ‘dry run’ of pipe work and fittings before final fixing of the solvent-weld fittings.

It took Matt seven days from leaving the UK to returning home to install the system. 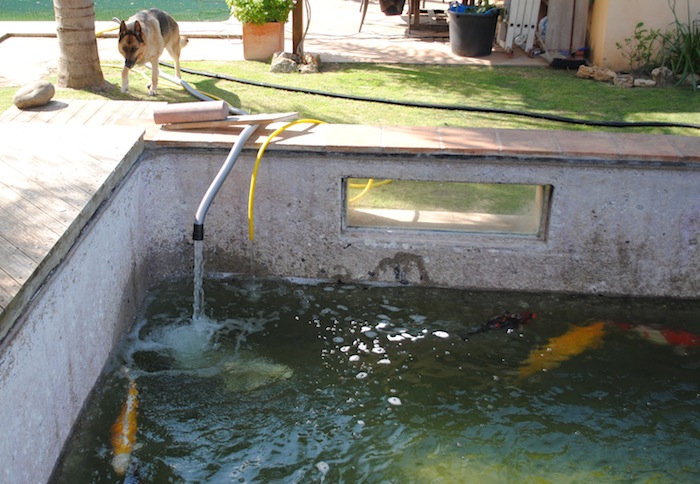 As the filter installation was nearing completion, the Koi pond was re-filled again with water from the swimming pool and the security guards kept a careful eye throughout. 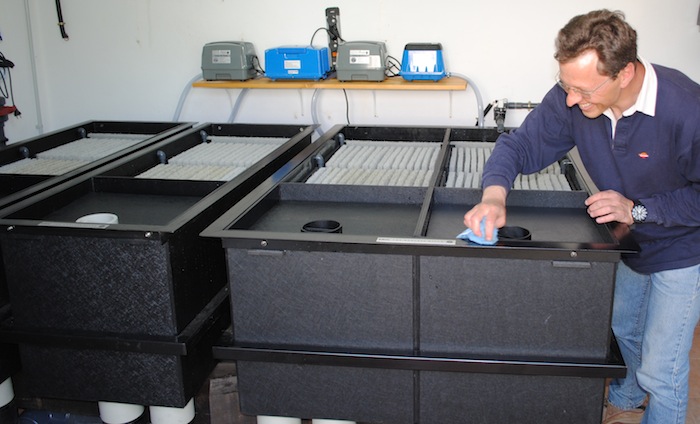 Of course, as every ERIC filter owner knows, it is a mandatory requirement to ensure the units are spotless before they are filled for the very first time!

On a serious note, I now position all ERICMAT blocks in the vertical position as can be seen here. Reasons for this will be explained soon on the main website. 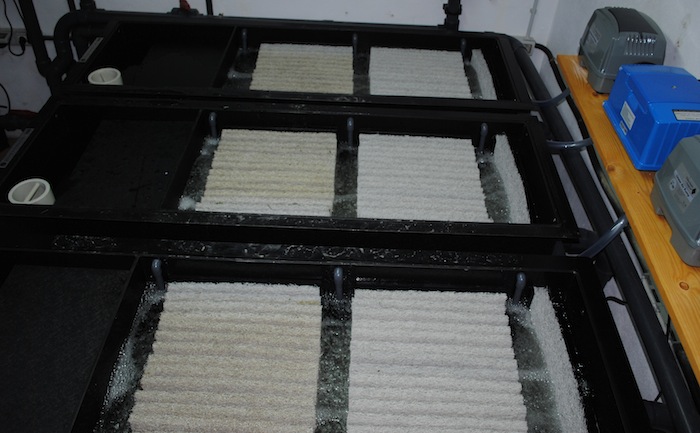 The pond level has now been reached and the filter systems switched to running operation as shown.

In ‘Multi-ERIC’ installations, daily discharge requirements are both rapid and painless. In this installation the owner will carry out discharges as follows: –

1. The end flat sheet mat section will be removed from each unit.

2. The lower transfer sliders in the bulkheads will be left partially open permanently.

3. For the first 30 days of operation, one river will be completely flushed to waste daily and the next river will follow in sequence daily. This amounts to 83 gallons or 380 litres of water only and takes less than 2 minutes from the pump being switched off to being switched back on. There will be no detectable level drop in the system and the constant trickle of new water will slowly bring the level back to normal.

4. After the first 30 days there will be two rivers per day dropped to waste completely.

5. It has also been arranged that the new water ‘trickle’ will be slowly passed through ‘Re-Fresh’ powder as it enters the system. In short – Perfection!