This Eric installation took around seven hours to install onto a heated pond already running with the Koi stocks still inside the pond. 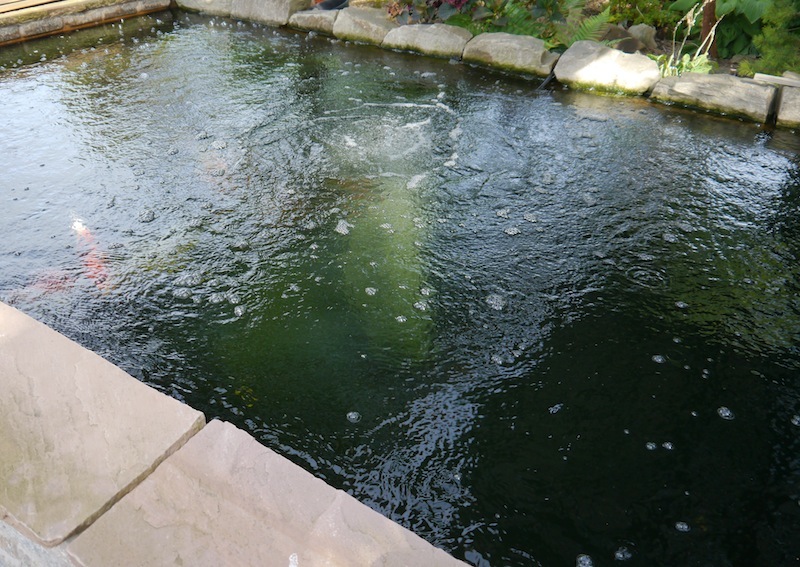 This rectangular pond held some 4,000 gallons with a centrally placed bottom drain and had been running for some time with the large filter system seen here. 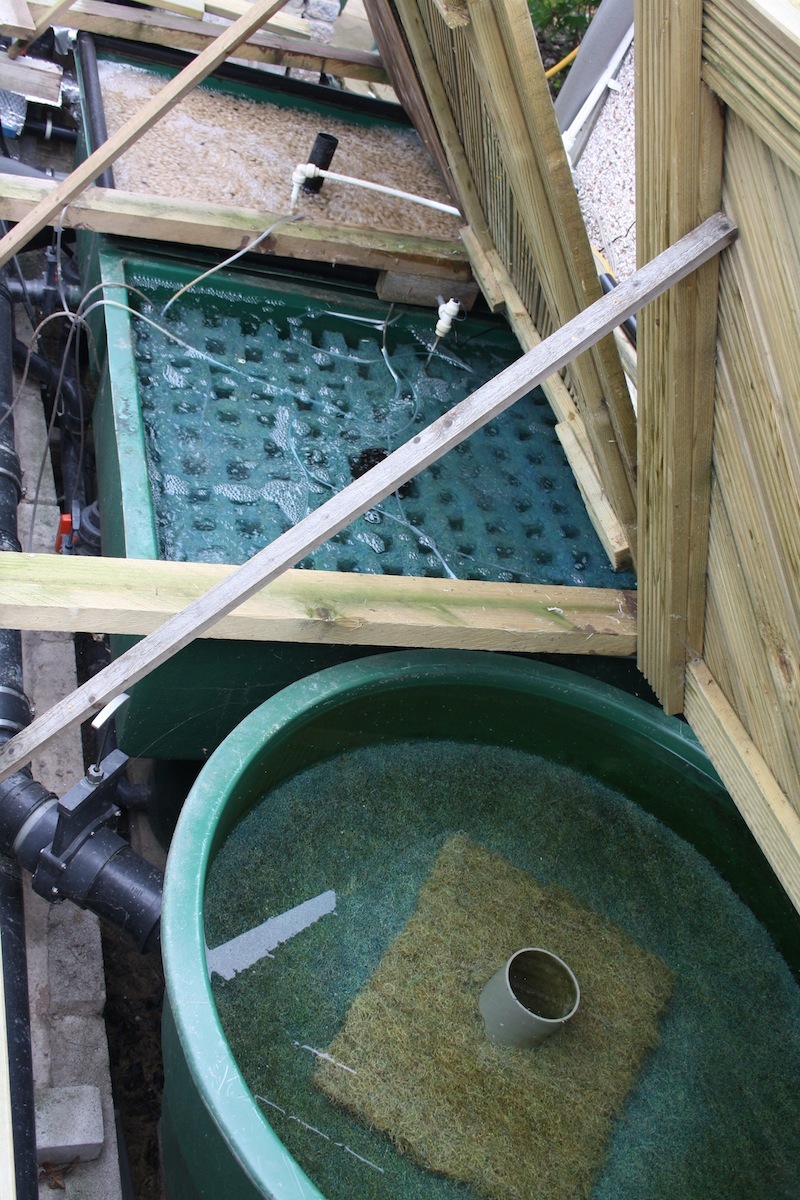 The first problem to consider before the filter system could be removed was how to cut the 4” drain line which was some three feet below water level and still keep the normal level of water in the pond?

Normally the pond level would have to be dropped three feet before the pipe could be cut or a diver would be needed to place a pipe stop on the bottom drain sump.

The filter system was delivered at 7.30am on 8/9/11 as arranged to find that the owner had isolated the pond from the filter before the delivery and he’d done the job perfectly! 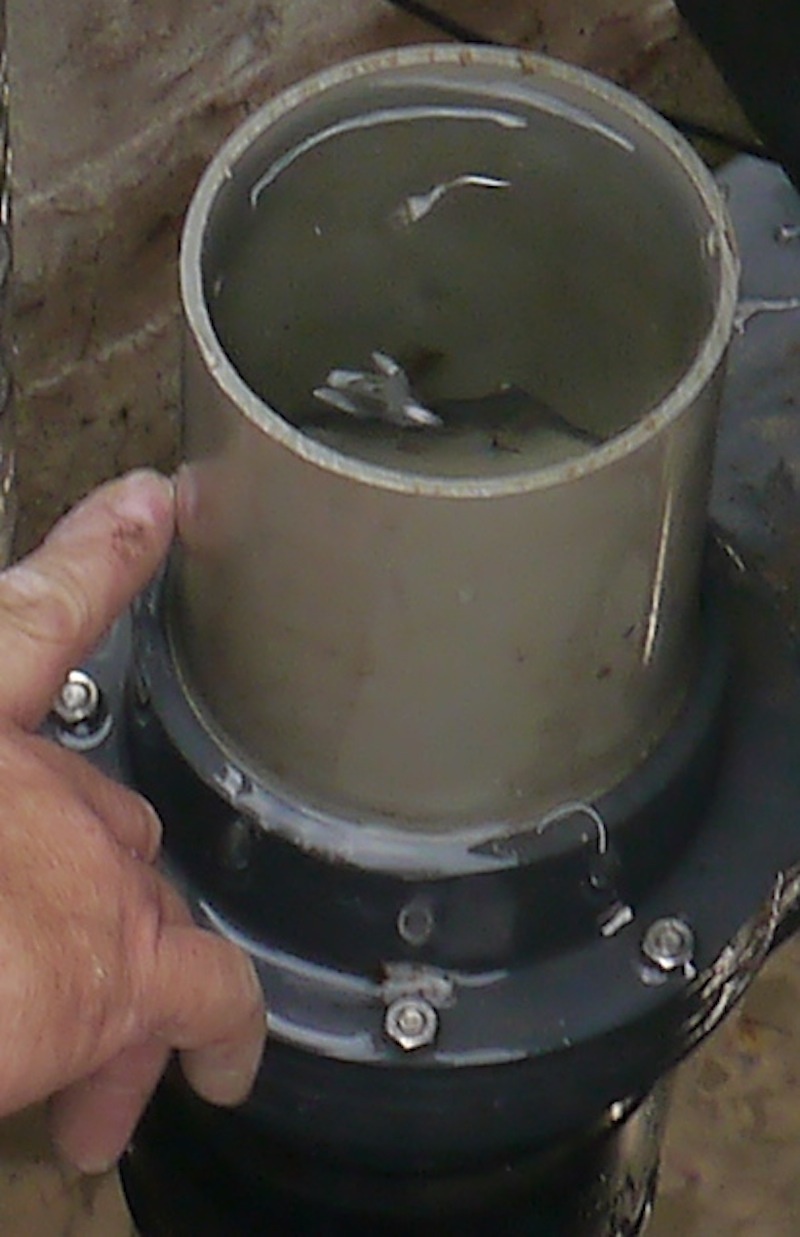 A heavy-duty 4” knife valve had been attached to a standard rubber socket and tightened leaving the other end of the socket fully open.

I really wish I had seen the next part, which meant sawing the 4” pipeline off as it came up vertically from the ground and capping it instantly with the valve and socket assembly before the pressure of water in the tube lifted the owner up into the air and then deposited him into the pond!

The next job was simple in comparison to the ‘Red Adair’ work just completed and this was the draining and removal of the existing filter units to an area in the garden for collection later by someone who had bought them all.

The next stage was to build a base on the bottom of the concrete pad and raise it sufficiently to a level that would support the new filter at the correct height. This was the first stage – 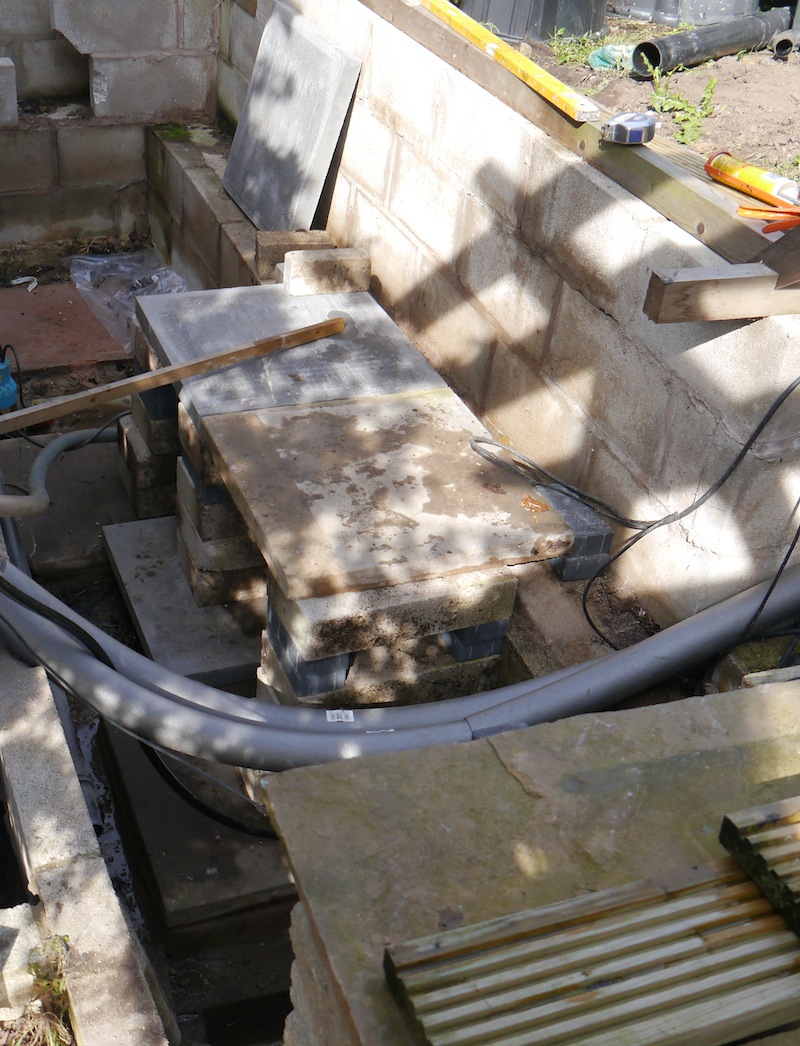 This was the second stage – 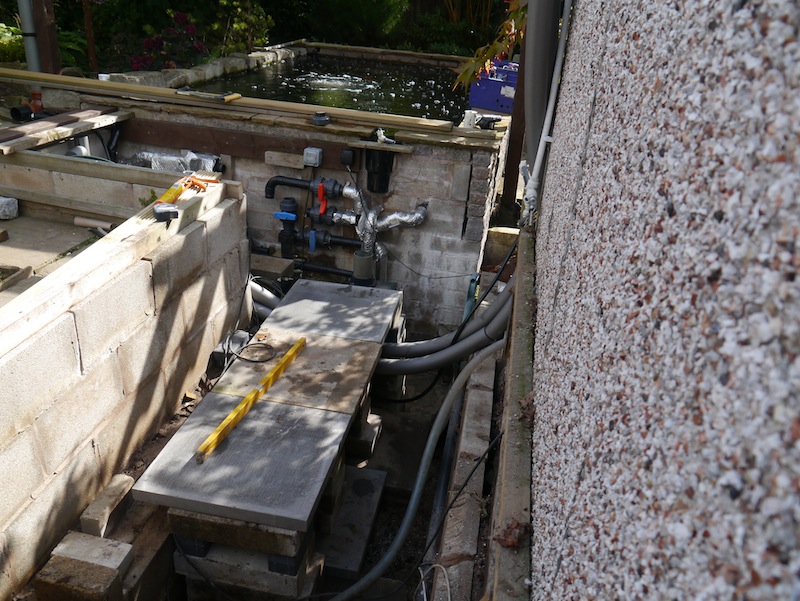 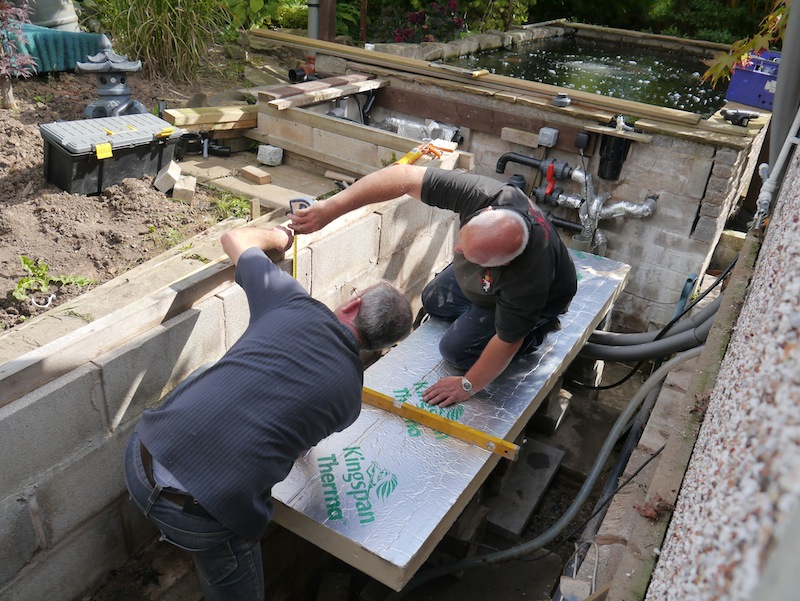 I’m not pretending that any of my units are ‘light’ – they are not, and this Eric Four is the heaviest of the lot. Still it was possible for two fit men to manoeuvre it into position after a bit of huffing and puffing.

But always remember I was there on hand to assist should the need have arisen? And if you believe that…….. 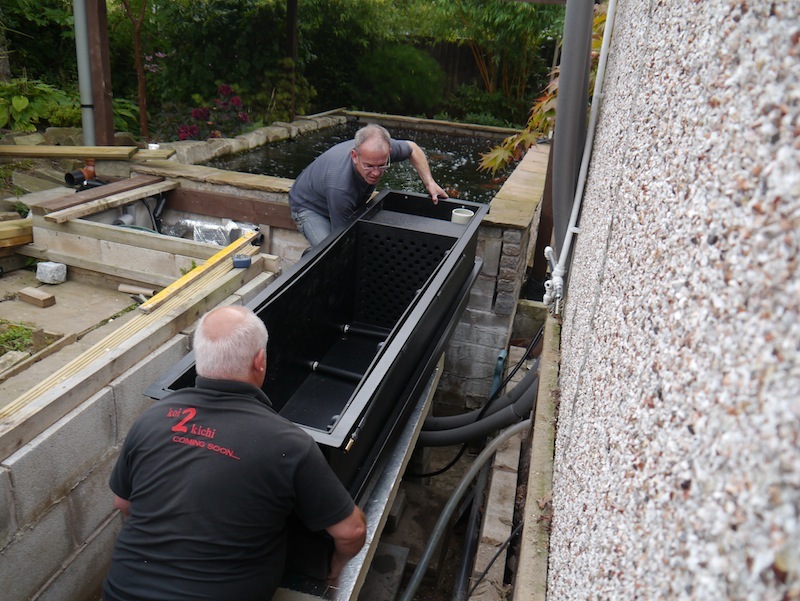 The ‘master plan’ was to drop the inlet of the filter directly onto the drain line mentioned earlier. 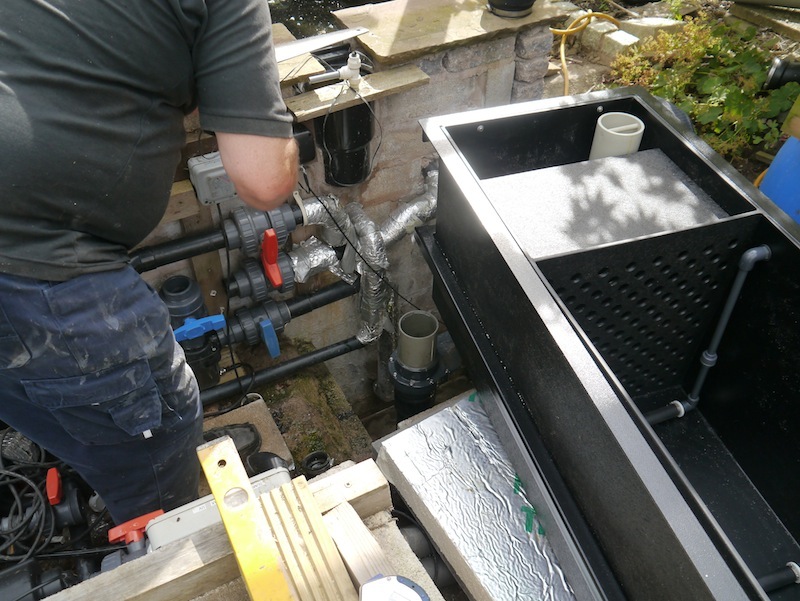 This was not exactly without the need for some accurate measurements and a little cutting of a fitting or two but after a few more minutes the filter was installed and the fittings sealed. 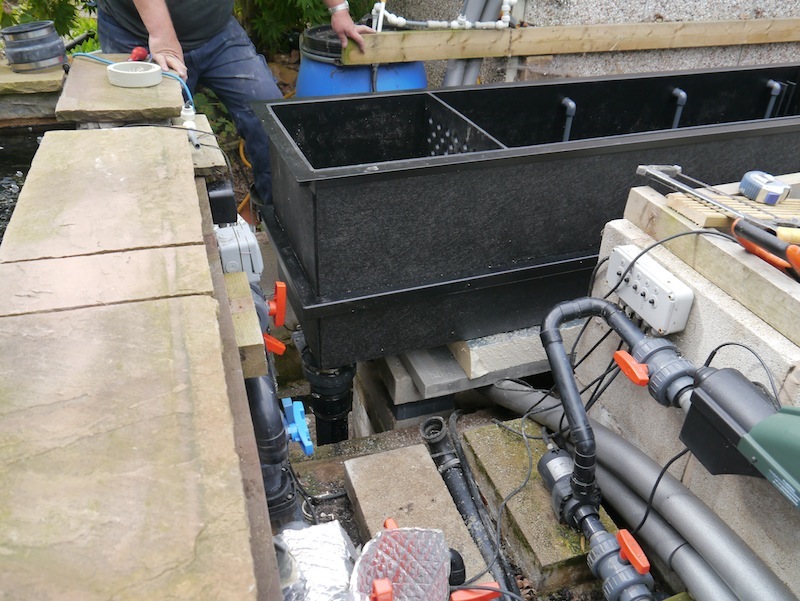 I must confess that having to stand by to watch all this hard work going on and to take photographs along the way did leave me with a thirst for a cup of tea………alas, the owner insisted we carried on with installing the water pump line back to the pond. 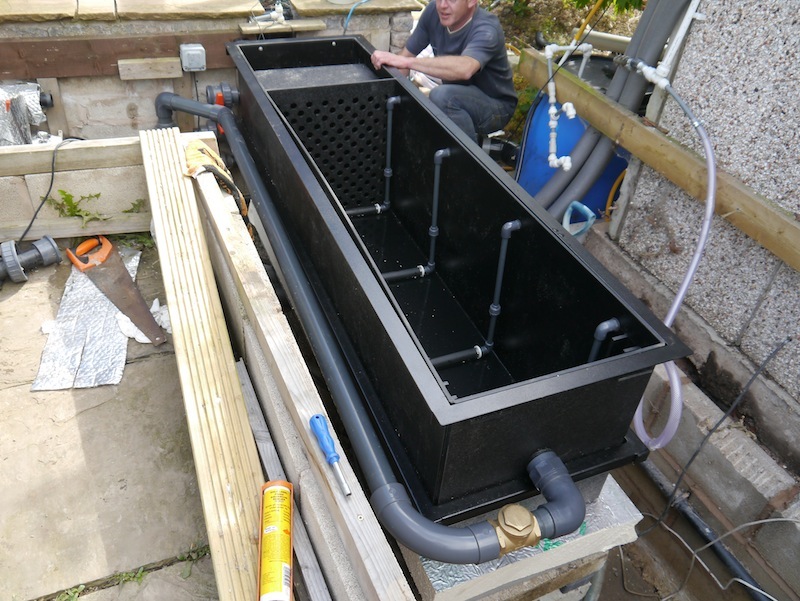 The one-way flap valve had to be incorporated as the return line entered the pond below water level and this prevents water siphoning back into the filter when discharge is carried out.

The next part was the acid test – this meant opening the knife valve and letting the pond water enter my precious filter – question was, would it leak? 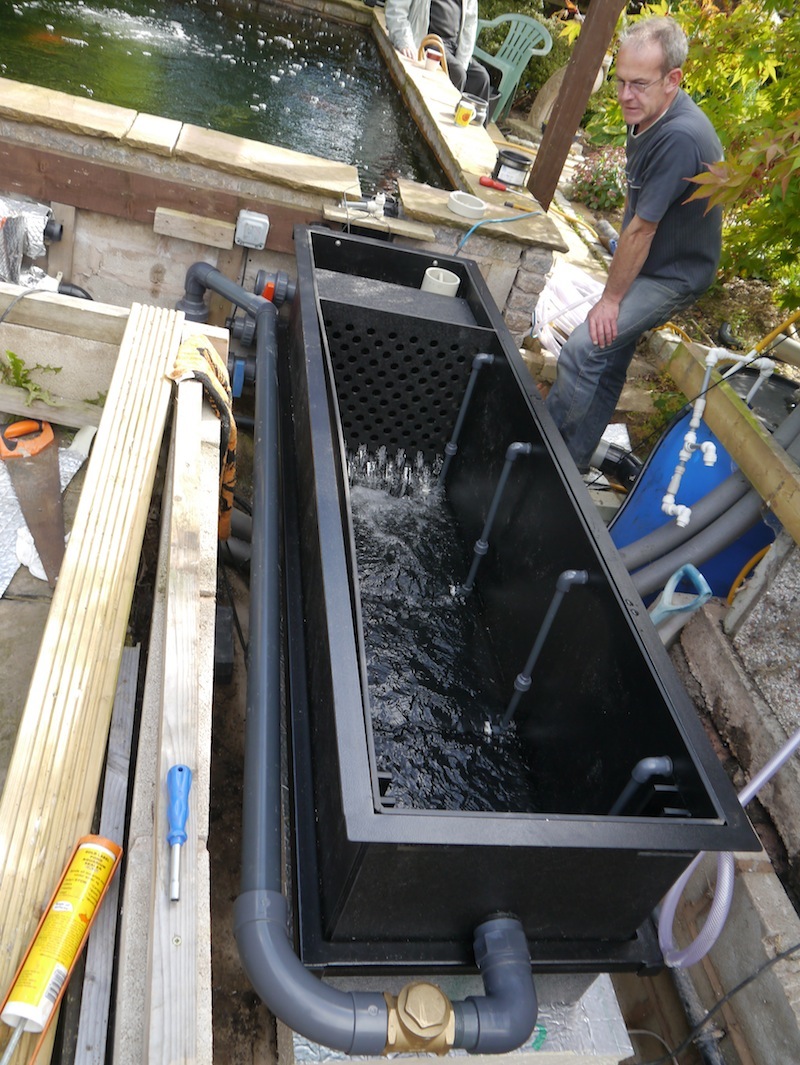 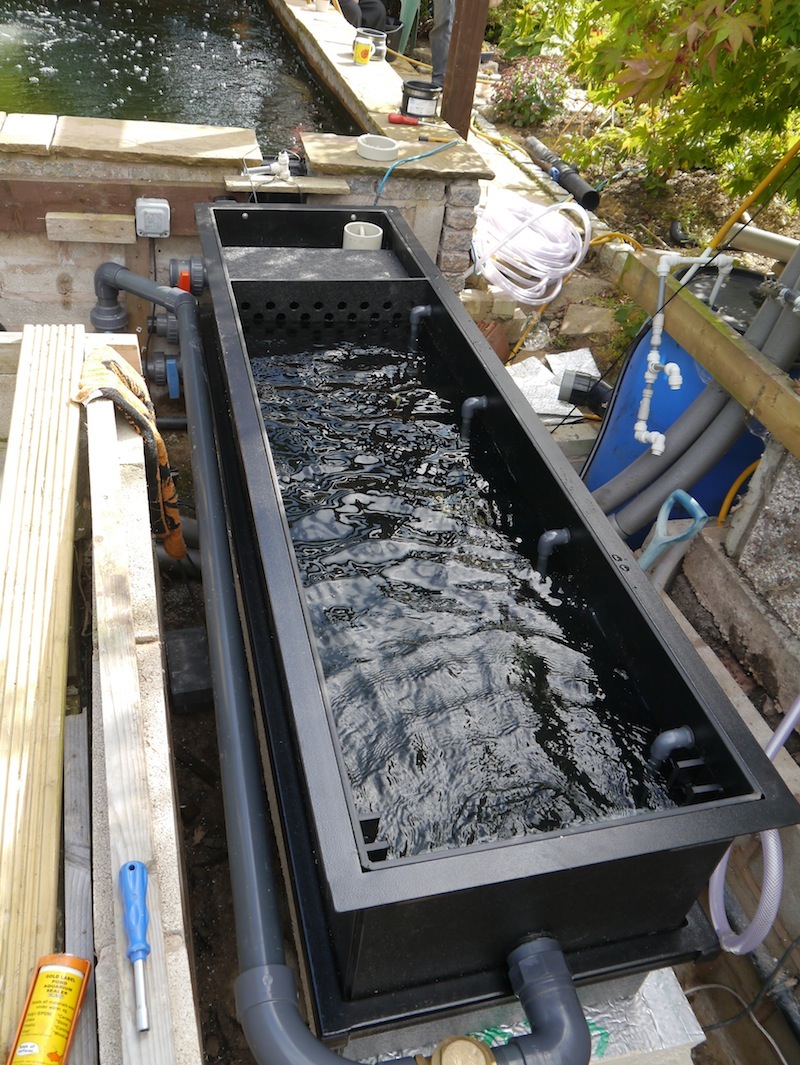 Surely it’s time for a cuppa? 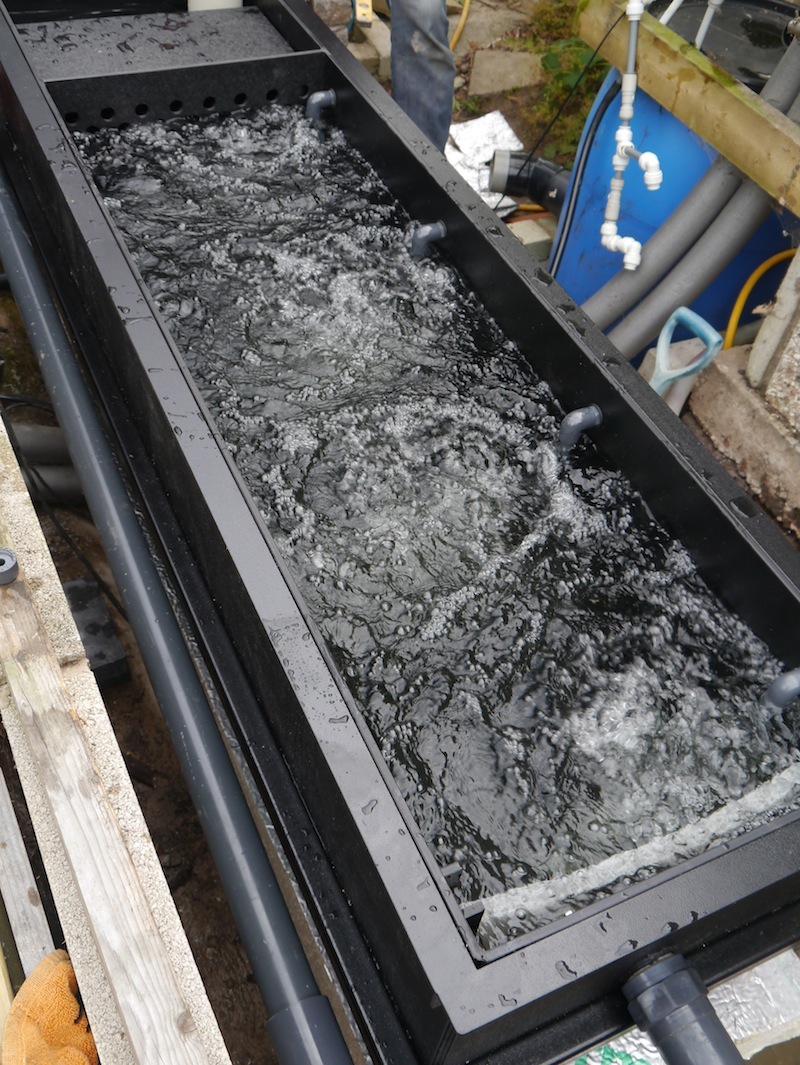 Well that seems perfect to me – is it time for a cuppa yet?

No, not yet, where are the EricMat blocks?

How about a……oh, you wish to turn the pump on to check running level…..OK let’s see.. 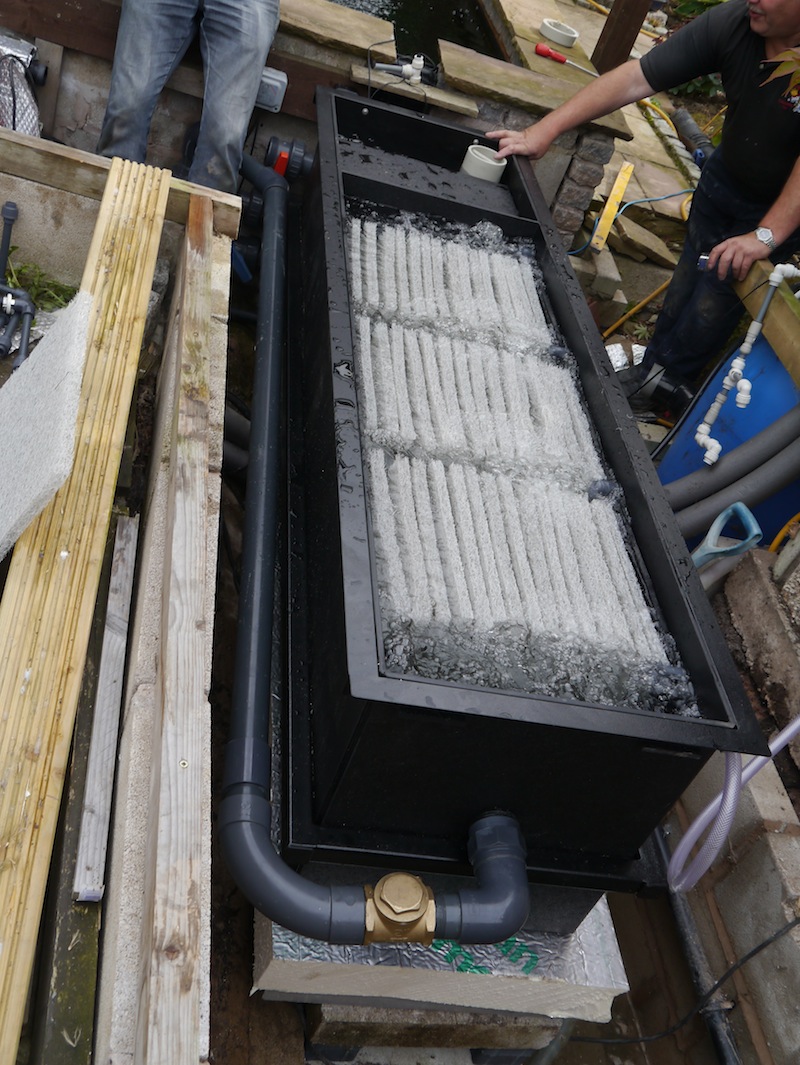 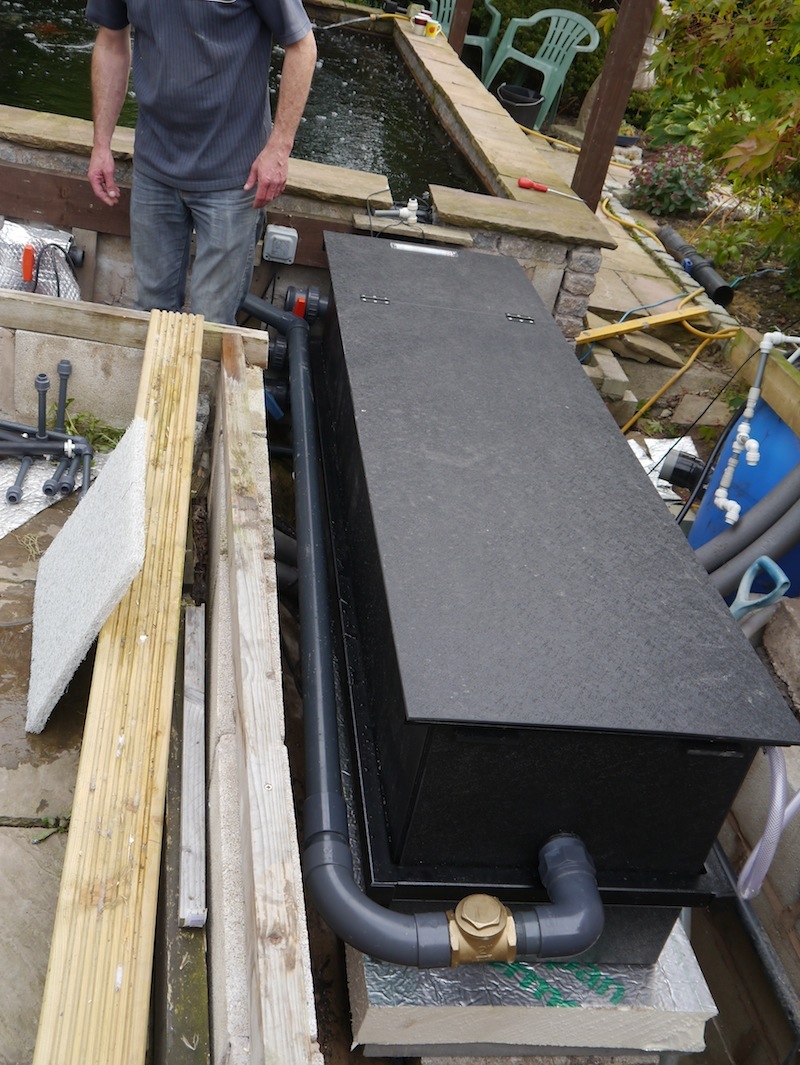 Seemingly Neil’s disappeared into the house, wonder if there’s an outside chance of a cuppa?

Better check the Koi are happy with their new filter in the meantime….. 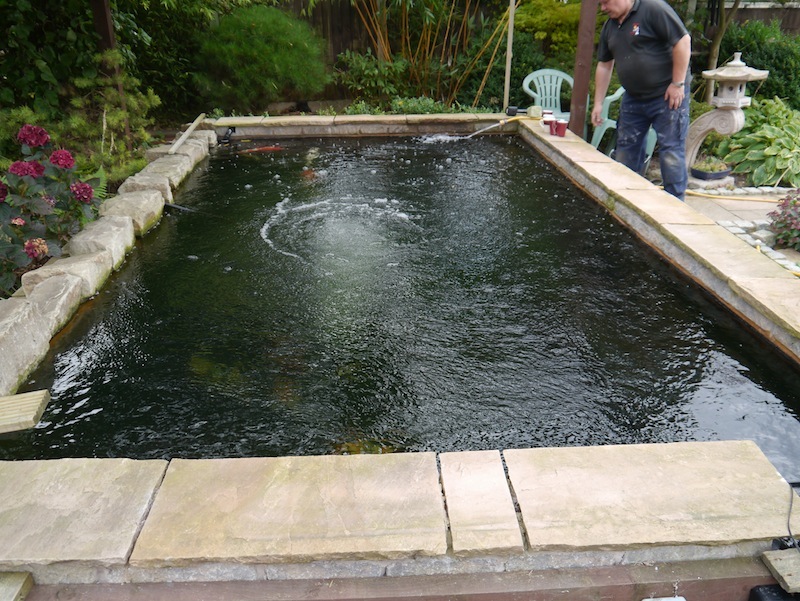 Dunno how much stuff it’s going to take to fill in the rest of the old filter box; in terms of cubic feet it’s not taken up even 25% of the cubic space taken up by the old filter but always remember this, there’s a bonus –

IT ALSO MAKES A PERFECT COFFEE TABLE TO BOOT! 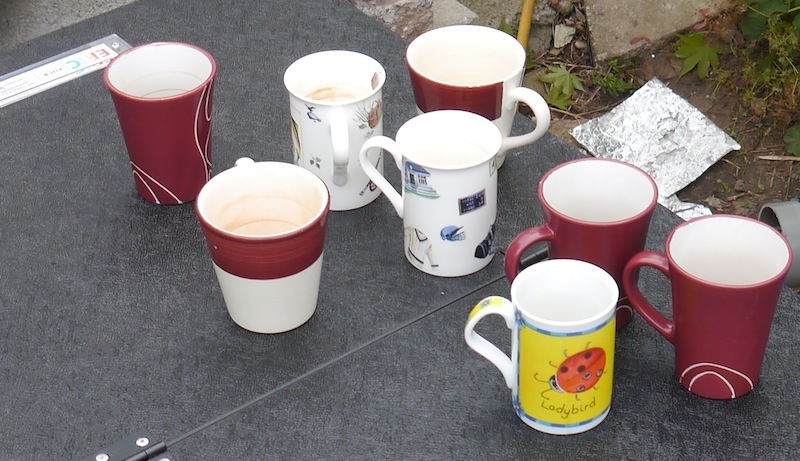 By the time I got back home I was exhausted……..all that work!