It’s been 4 months since installation of my ERIC 3; I thought you may be interested in some of the background and how things are going so far, please feel free to share.

I think I come into the hobby via a similar route to many; I had been a keen angler and had always kept fish of one sort or another in indoor aquariums, so in moving house during 2005 and having never had a garden before the natural progression was to want a pond. Having decided during 2006 that we were going to go for it, I decided it would be done once but done properly even if it meant the additional expense of hiring someone else to do the build. Of course I’d done my research the best I could from information on the web and books and decided the core filtration was to be a Nexus 300; basing the sizing on my eventual pond gallonage (1,800 gallons) I wanted something that could filter 3 x that amount to allow for “future capacity” (not that I necessarily knew what this was as I was only just entering the koi keeping world but I wanted it to be bigger than necessary).

Over the next few years the fish I had purchased were of course getting bigger and I felt the need to make some improvements to the filtration system; I’m not sure if I actually needed to but I’m sure a lot of hobbyists have gone through the cycle of endlessly adding things on and tweaking over the years in order to reach some state of perfection. By the end of 2008 I had added a 2’ vortex, an EstroSieve and a Clarity CL3 unit – all this for 1,800 gallons!?

I first heard of ERIC at the South East Koi Show in 2009 where a certain Peter Waddington was holding a lecture on the day we visited, I didn’t know what the lecture was about in advance but we decided to pop in and have a listen (incidentally this was the first Koi show we ever attended). I didn’t really appreciate it at the time but Peter was discussing the ERIC filter, and had what I think was the first production model at the show. We had a look but it wasn’t something that interested me at the time but I could see there was a fair bit of common sense in what Peter had said in the lecture.

I think it was during 2010 that I started researching the ERIC a bit more seriously, in particular the information available on Peter’s KoiKichi and ERIC Pond Filters web sites. I found myself re-visiting them a number of times over the months and also joined the Them There Koyas forum in search of more information.

During this time I had started to reverse the trend of all the add-on’s having decided to remove the vortex and the sieve (not before one last tweak and trying the sieve before the Nexus with two pumps trick).

But – I kept finding myself back at the ERIC web site and it kept on screaming common sense at me, I’d also measured the filter house a number of times to see if an ERIC 3 would fit – suffice to say by early 2011 I knew it was only a matter of time before I changed so I decided to contact Peter regarding the installation of an ERIC 3.

I won’t go into all the detail but for anyone interested; Peter openly challenged me to reveal all in terms of my experience of running the ERIC to date and provide an initial verdict

(If anyone is interested in reading further) I intend to provide further updates as the months (years?) progress.

In summary though, why did I change to ERIC?

Firstly there was the apparent endless cycle of add-on’s and tinkering I noted above; this had to stop (time and expense).

My Koi were only going to get bigger so I needed confidence in a system that within limits would take all that I could throw at it.

Most importantly though it was the simplicity and the fact each day the filter would be new, there would be no nooks and crannies or enclosed spaces where muck could build-up un-noticed.

The verdict so far is – it has not disappointed. 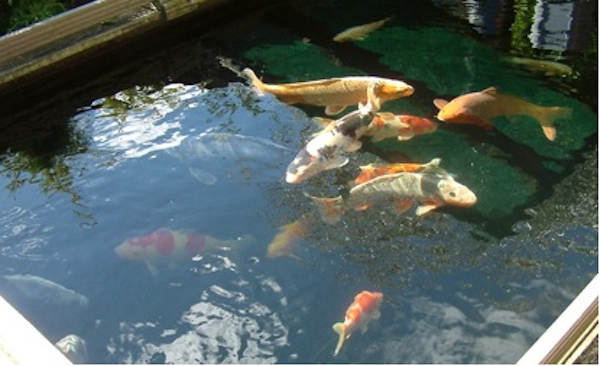 “PS. I am an active member of both the Them There Koyas and the Koi Mag forums and go under the name of chag05; if anyone has any questions I’m happy receive and respond to personal messages via these forums, I will do my best to answer.

If you are not a member I’m sure Peter will not mind being contacted in the first instance, he has my permission to pass my e-mail address on to anyone with a genuine interest.”