The water is absolutely crystal clear.

The pond is heated.

The pond has two bottom drains.

The filter is gravity-fed.

Alas, despite these ‘perfect’ conditions the Koi inside the pond are not exactly perfect so perhaps it’s some kind of disease? 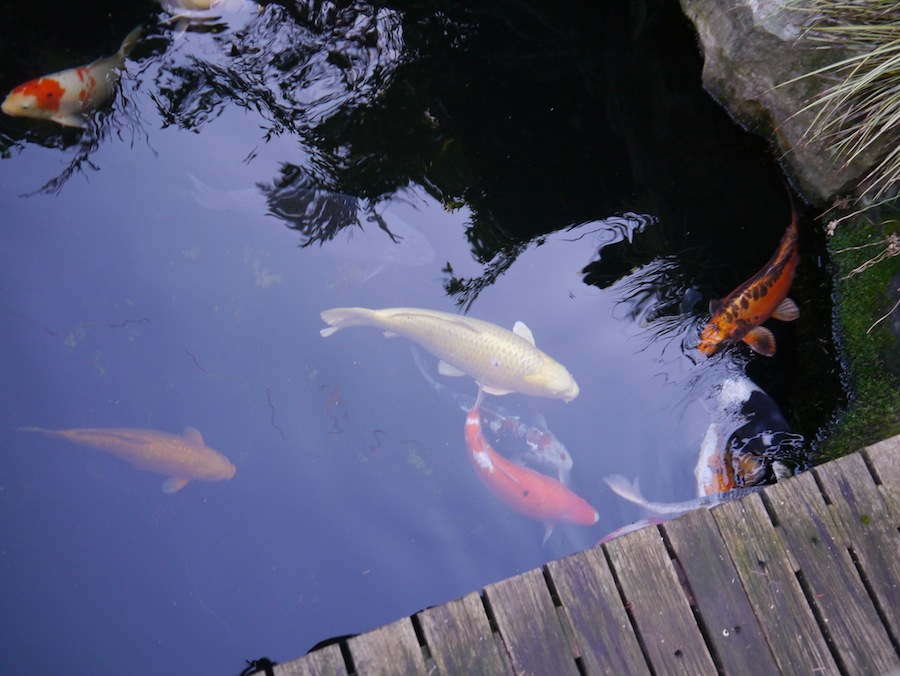 Well there is ‘shimi’ showing clearly on 50% of the Koi for starters. 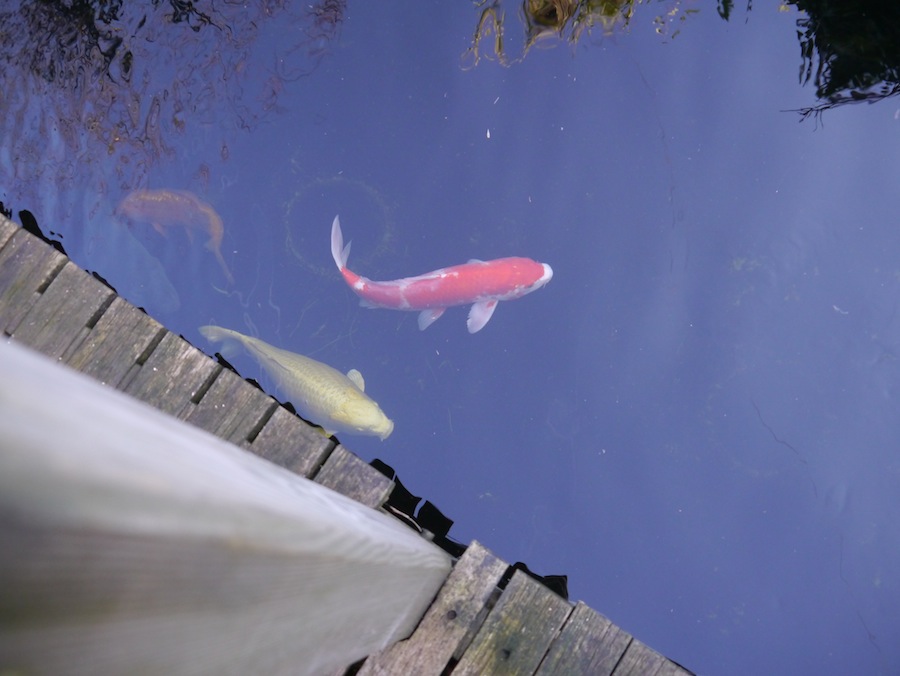 Not to mention ‘hikui’ showing clearly on almost all the Go-Sanke.

Not true ‘diseases’ as such, but problems that are impossible to rectify once manifested and problems
that also make a once-attractive Koi now totally valueless.

The pond looks fine visually so let’s check out the filter stages.

Here is the mechanical stage of the filter, it is a proper vortex unit copied directly from my design back in ’85.

I say ‘proper’ because the outlet transferring water to the next stage is placed centrally at the top of the unit, which is the only place an outlet must go in circular units to ensure the gentle spin takes place. It is also correct that the bore of the exit tube is larger than the bore of the inlet pipes as transfer takes place by ‘head’ being almost on the surface of the unit.

However, the many copiers of my unit decided it was far too complex and far too costly to do all of this. So they simply linked them to the next stage with a surface overflow positioned at water level and called them a vortex when really it was only a round box.

You can see in this vortex the stainless steel coil heat exchanger that controls the pond water temperatures from a natural gas boiler.

As far as mechanical stages are concerned it looks clean enough – although there are better options available today, however this pond was ‘professionally’ installed some 15 years ago.

Moving on to the biological stage now. 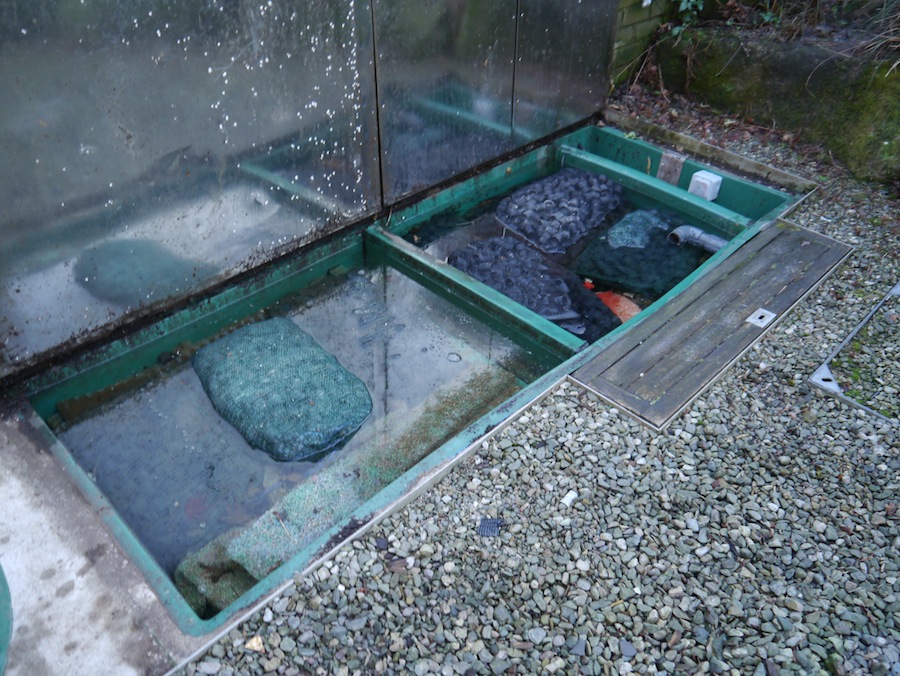 This type of biological filter is still BY FAR the most popular choice of the vast majority of Koi keepers around the world today but to confuse the matter it goes under a huge number of completely different titles.

This one here is a two-chamber unit made from glass-fibre. It could be a single chamber or even a five-chamber unit if desired.

Others are single or multi-chamber versions made from concrete block, rendered and waterproofed and often referred to as ‘block-built’ when they could equally be made from polypropylene or even carved by hand from bedrock – there is absolutely no difference.

All of these are merely water containers and that’s all.

There are others made rectangular.

There are others that are circular.

Some are even made octagonal.

Others pump water from the pond below into them and the water then returns to the pond from the surface of the box by ‘overflow’.

Some are heavily aerated whilst some others are not.

There isn’t a scrap of difference in the actual operation of ANY of these boxes but the name that should be given to ALL these boxes (in order to save much confusion) is the accurate term of ‘Upward-Flow Boxes’ and this is simply because water enters around the base of the box and exits at the surface of the box.

Now back to the filter in question – 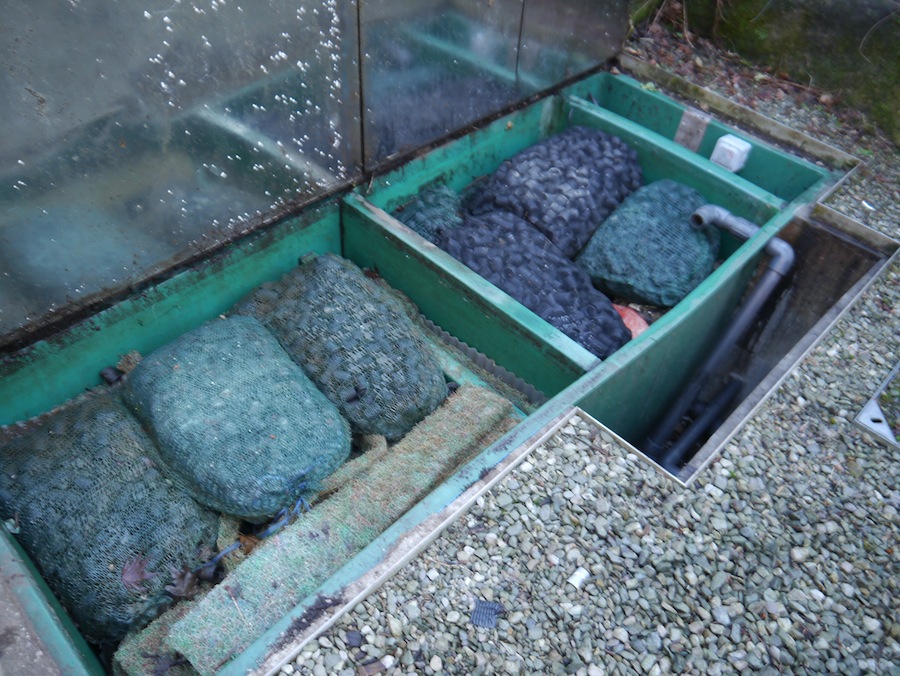 This shows the filter after the two chambers have been emptied after opening two 1.5” ball valves fitted to the sides at the base of both chambers.

The first chamber, which is supplied water from the vortex, is the one on the left.

There were two sacks of Flocor and one sack of Alfagrog but when these were removed the entire chamber was crammed with Japanese filter mat.

The second chamber to the right contained only Flocor and Alfagrog.

Note also that the transfer port dividing the two boxes also had filter mat to contact the water as it dropped from the surface of the first box to the base of the second box.

Next followed the removal of the media. 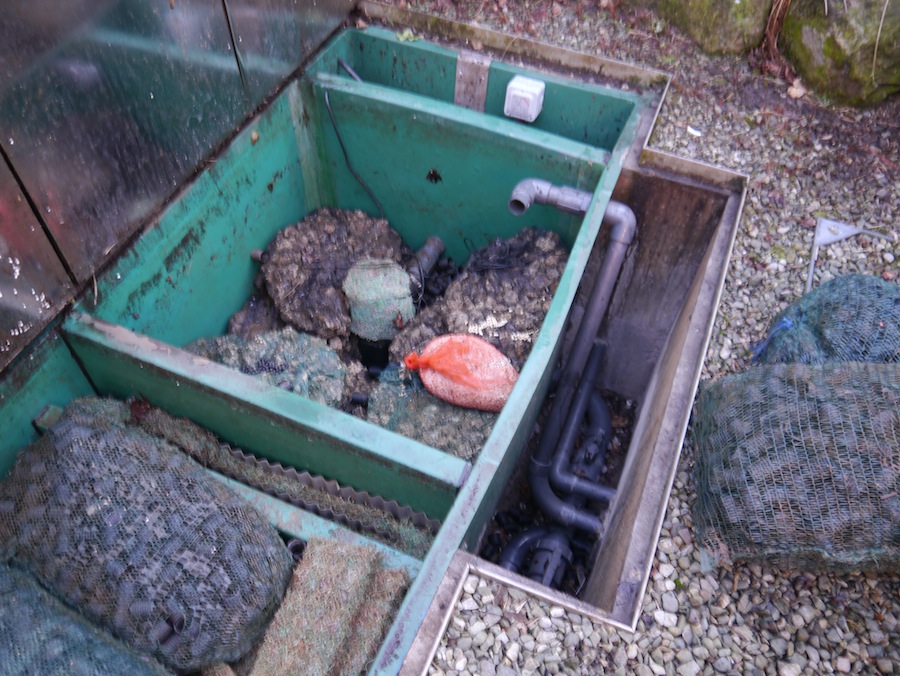 And stacking neatly it to be loaded onto the waste skip later. 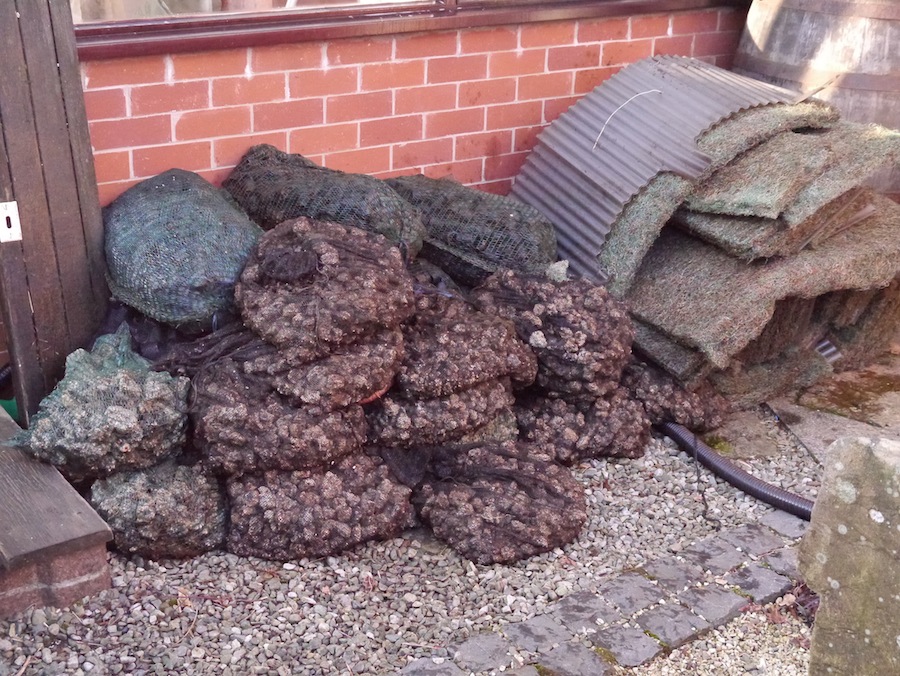 This didn’t look exactly ‘good’ to me.

But this was only the tip of the iceberg. 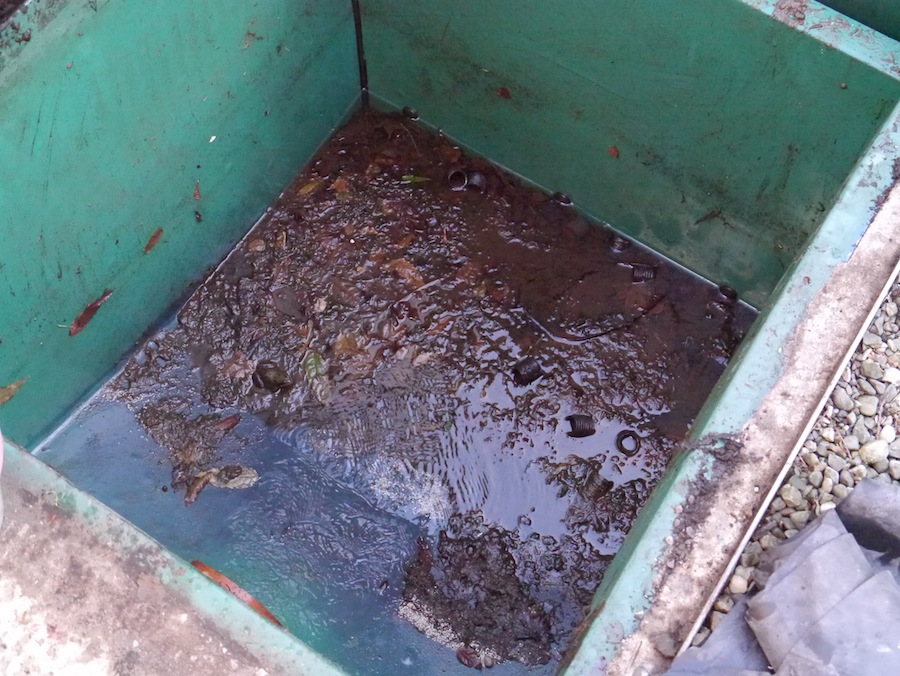 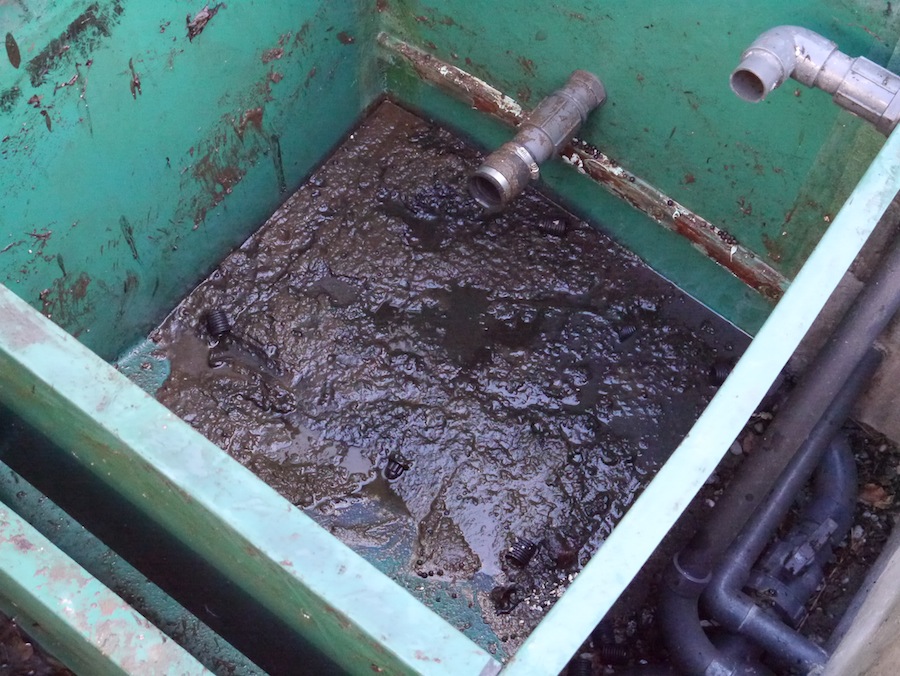 The wisdom of wearing gloves cannot possibly be stressed too much in these situations. 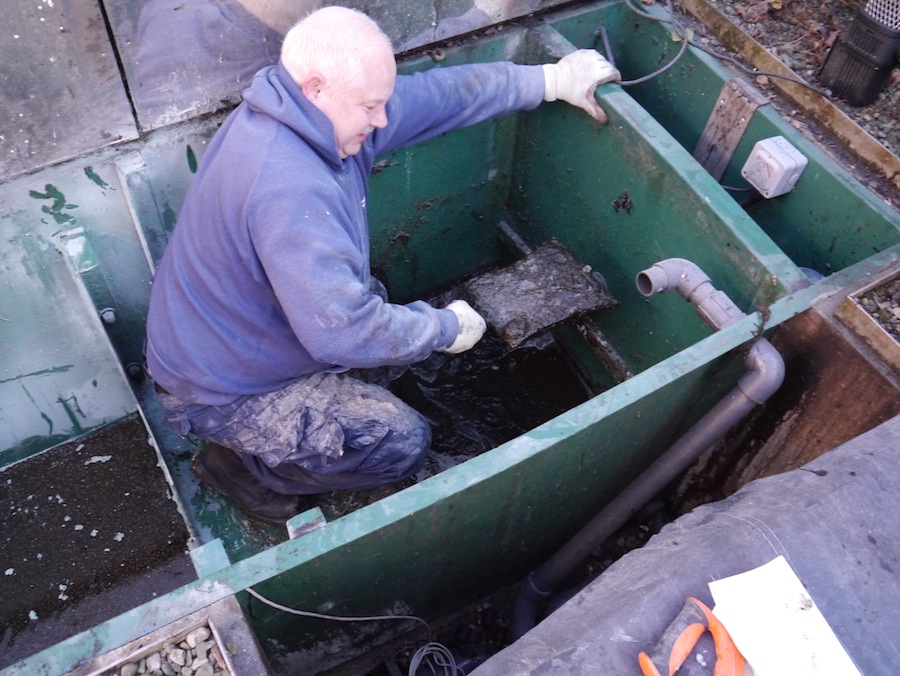 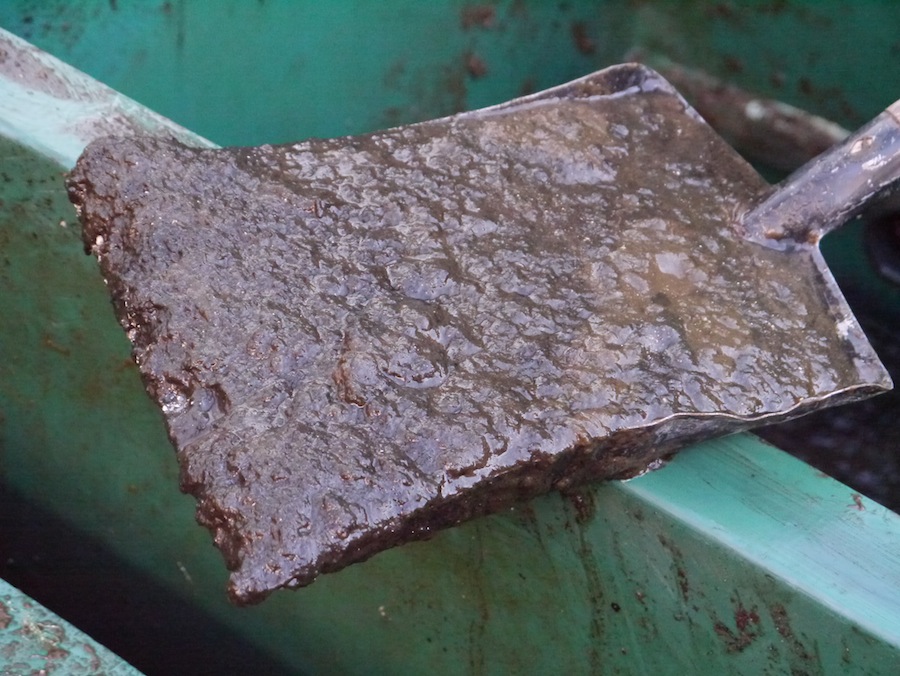 It was estimated that some 10 gallons of this foul-smelling mess was removed before the box could be cleaned. 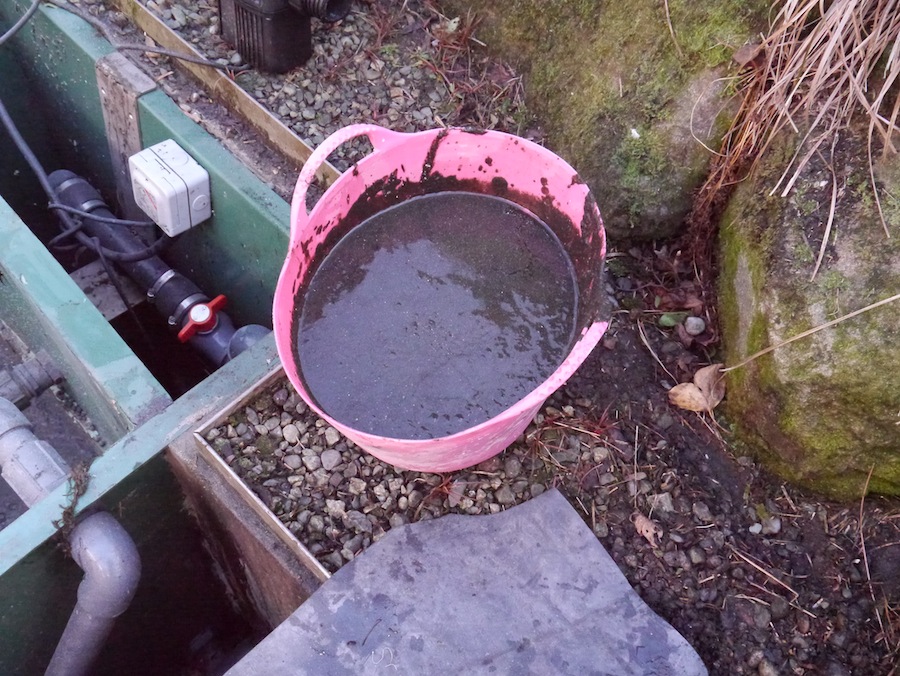 And here’s a perfect example of how NOT to use Japanese filter mat. 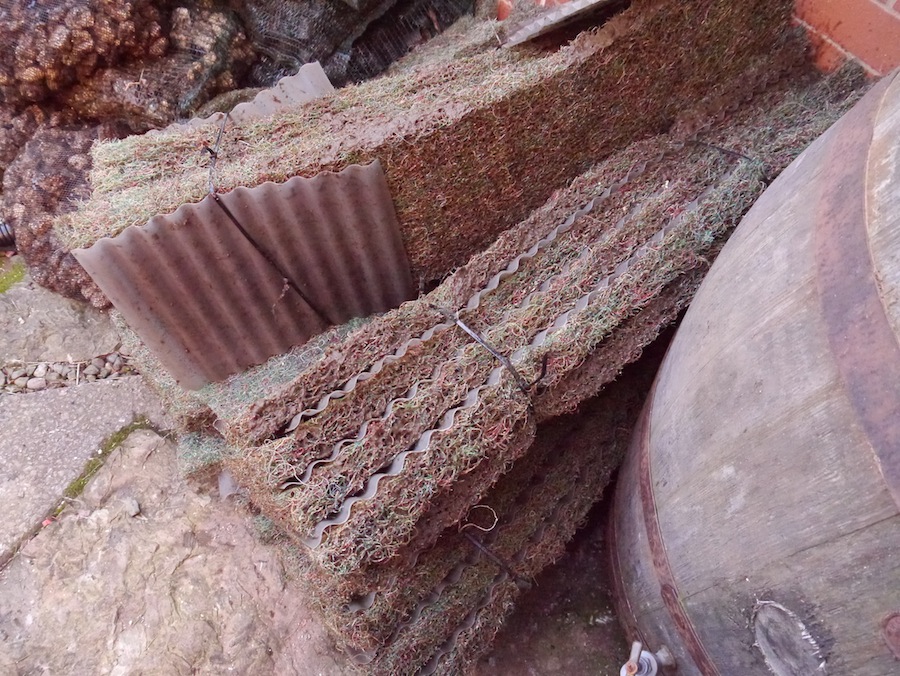 However, the next time you see forum posts that praise ‘block-built filters’ or others that urge innocents to ‘Get some Grog mate – you won’t regret it’! – You will also realise that these armchair filtration experts are shooting this sterling advice directly out of their own ar*es!

There are untold thousands of other similar ‘filtration time bombs’ in this world ready to go off at any time.

‘Perfect water readings’ mean even less than zero when the Koi have to face all this cr*p and the pollution it gives off – day in and day out!

And many STILL wonder as to why shimi and hikui completely wreck their Koi?

I’ll continue this in a couple of days because it’s FAR from over yet.