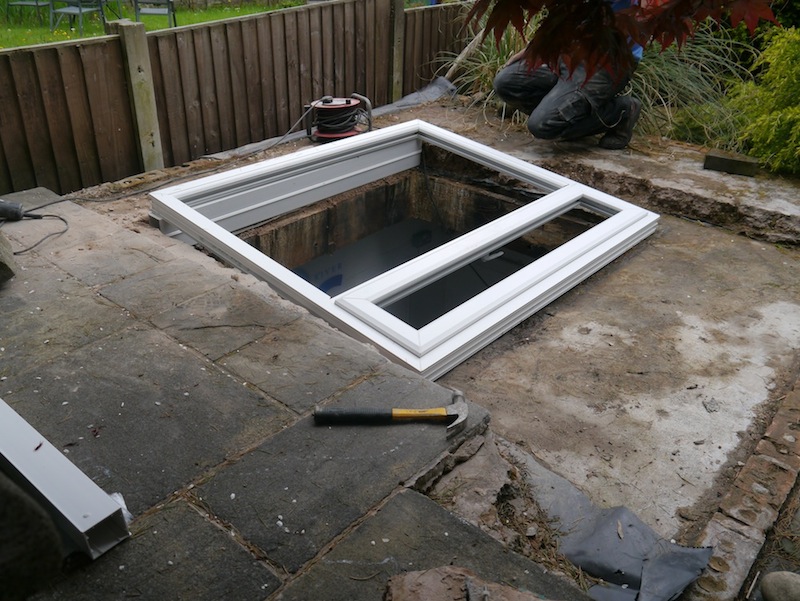 This next shot requires a little advance explanation, because it’s a reflection of my sense of humour.

The single filter I’d decided upon that would (hopefully) filter the entire pond was a standard Eric Four unit, but in order to demonstrate and video the interior workings to full effect, I had it made-up in clear acrylic – rather than black polypropylene.

Then the mind started to wander, I decided to fit pink frames instead of the black ones and name the filter ‘ERICA’ – of course this would be the first FEMALE filtration system known to man! 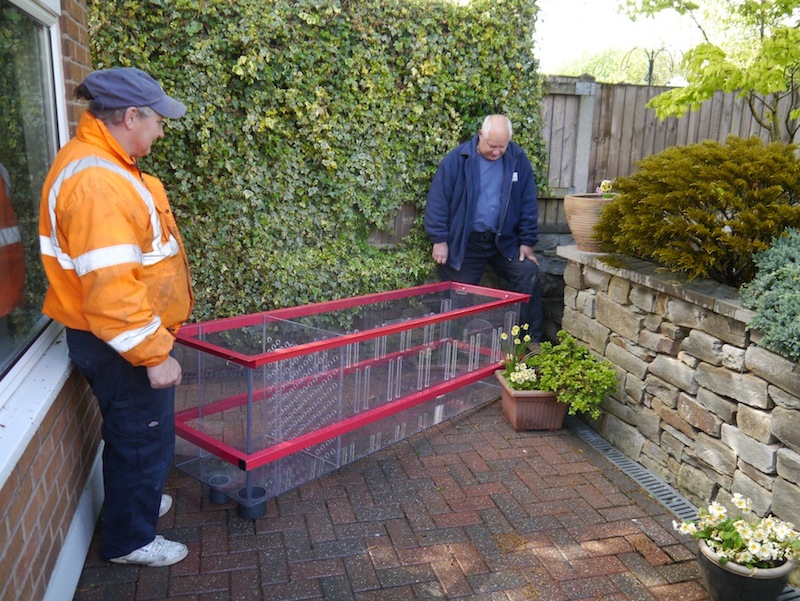 Whilst all this fun was taking place, Ian had finally managed to stop all four incoming drain lines and the pond itself could be filled.

This very accurate flow meter was used to record the water volume. 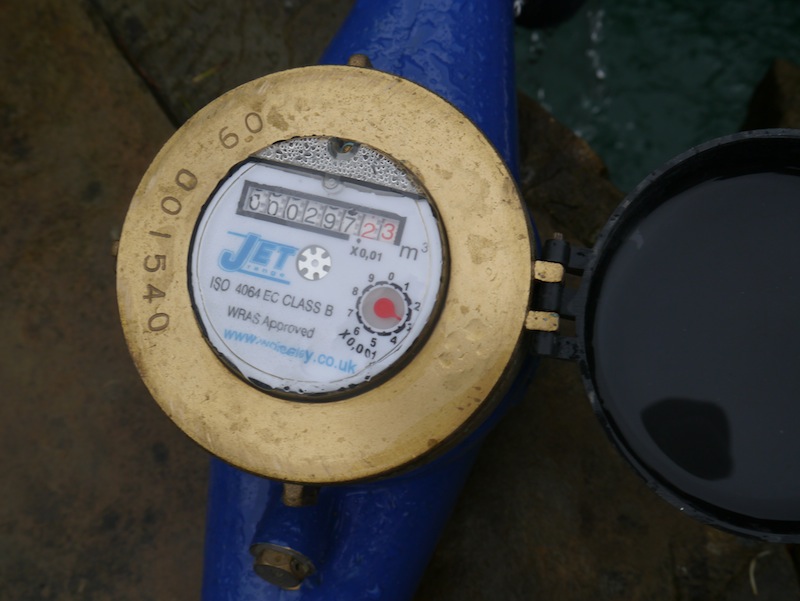 This is a shot of how the pond looked after the first fill and the flow meter registered 16,400 gallons. 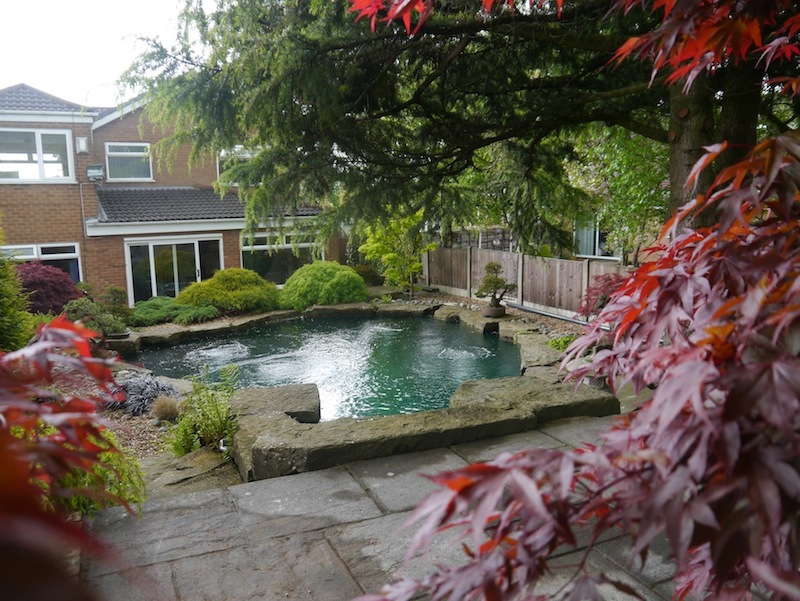 And of course, ERICA would require a matching pink stand. 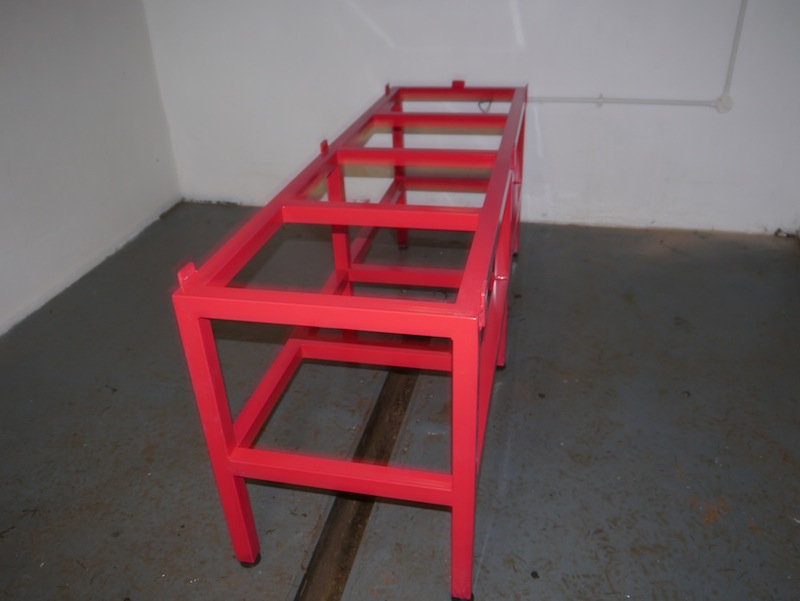 Whilst Ian was still working inside the filter house on the complex assembly of pipelines, he still had the time to demonstrate the waterfall.

The water is supplied by pump from one of the pond skimmer lines and then pumped to the waterfall header tank. 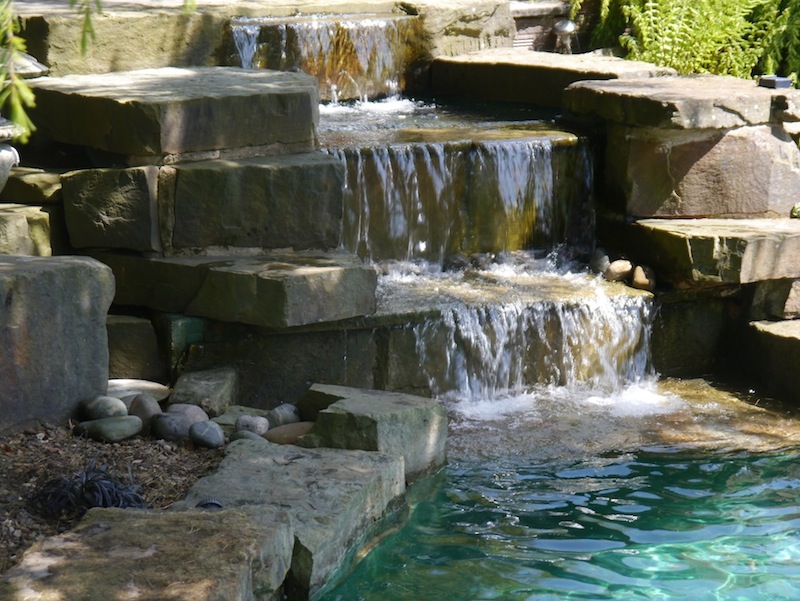 Inside the filter house, ERICA was looking truly magnificent. 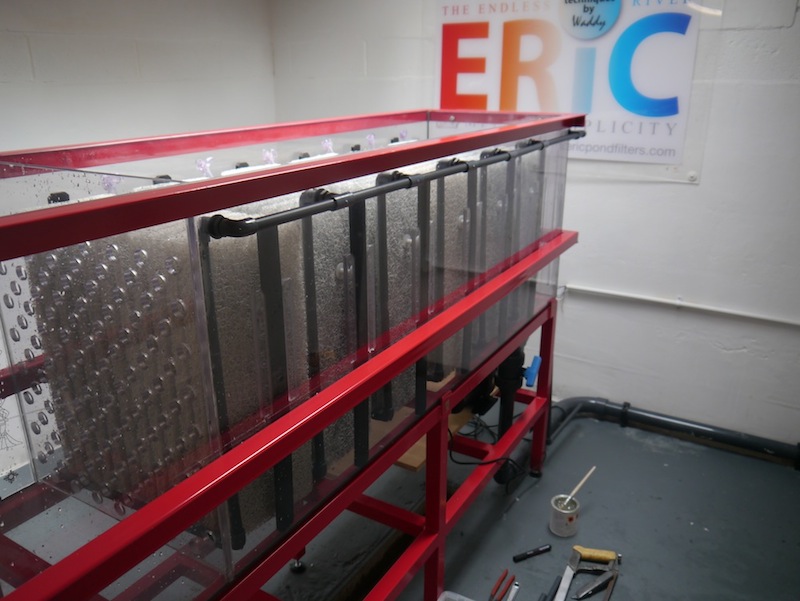 This is another of Ian Miles’ inventions – the perfect overflow, fed from an old pond wall return line and as accurate as a millimeter. 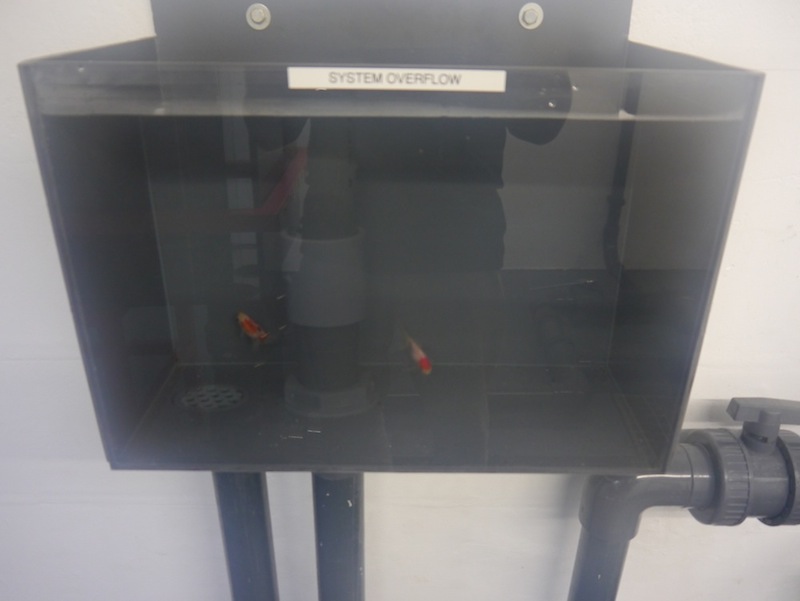 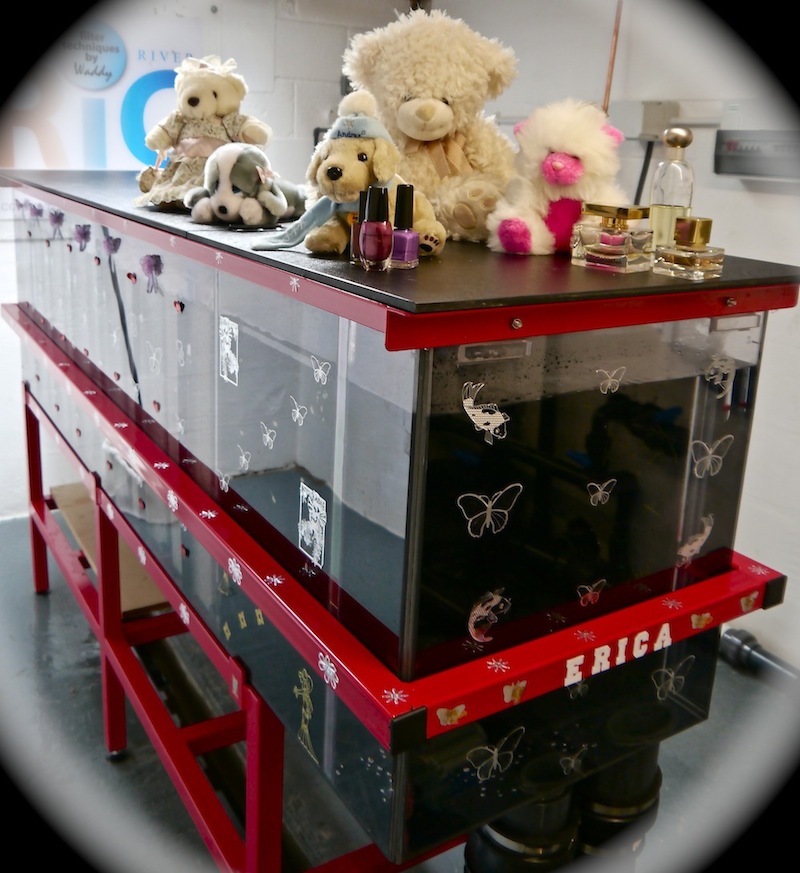 And the renovated pond? 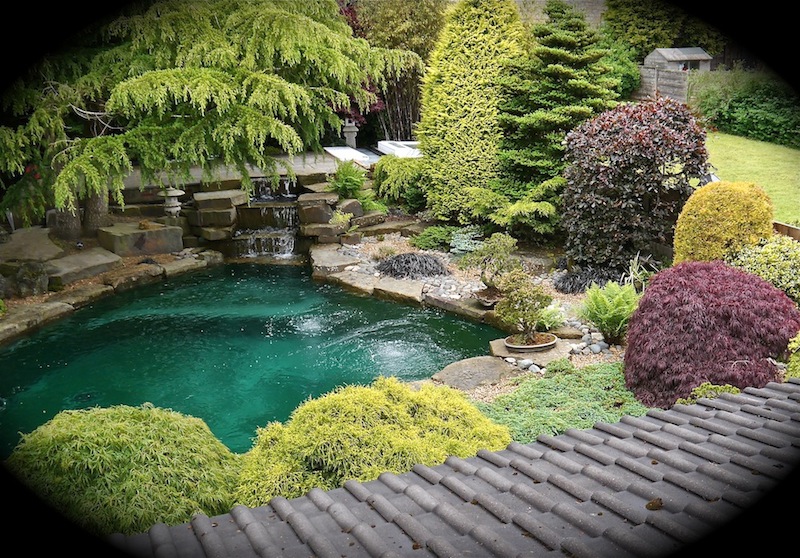 Here’s an illustration of the drain layout – 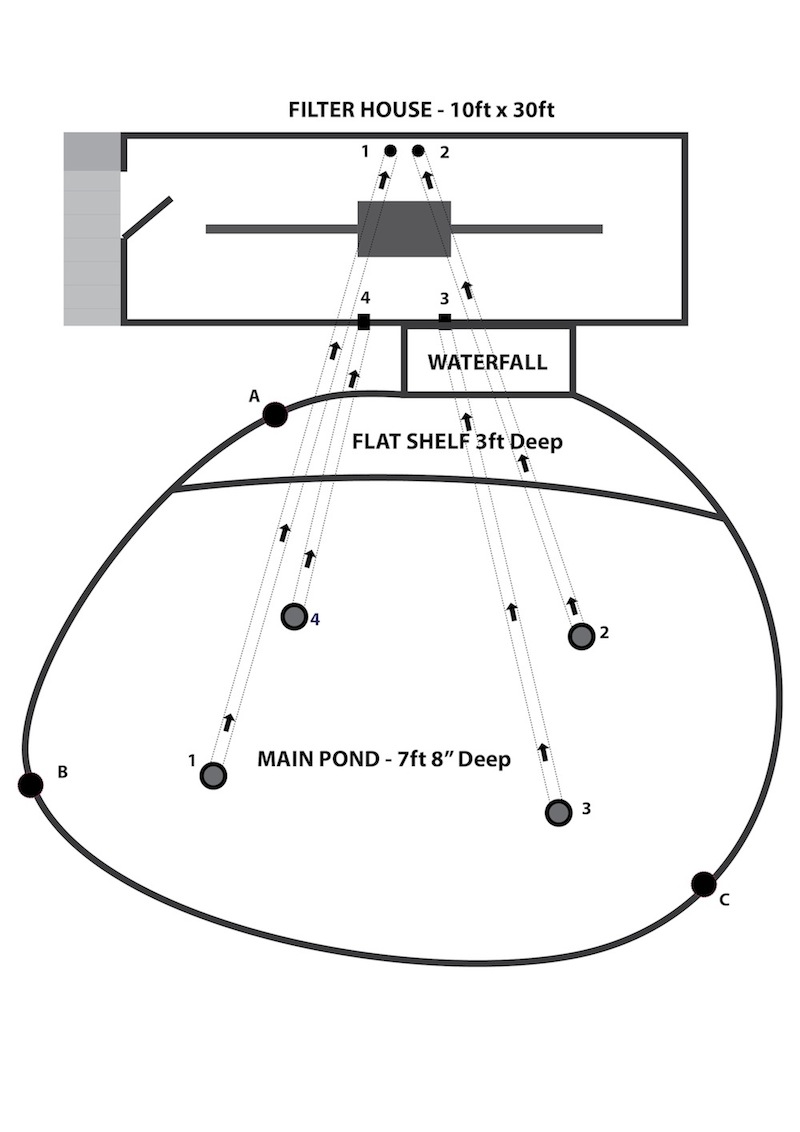 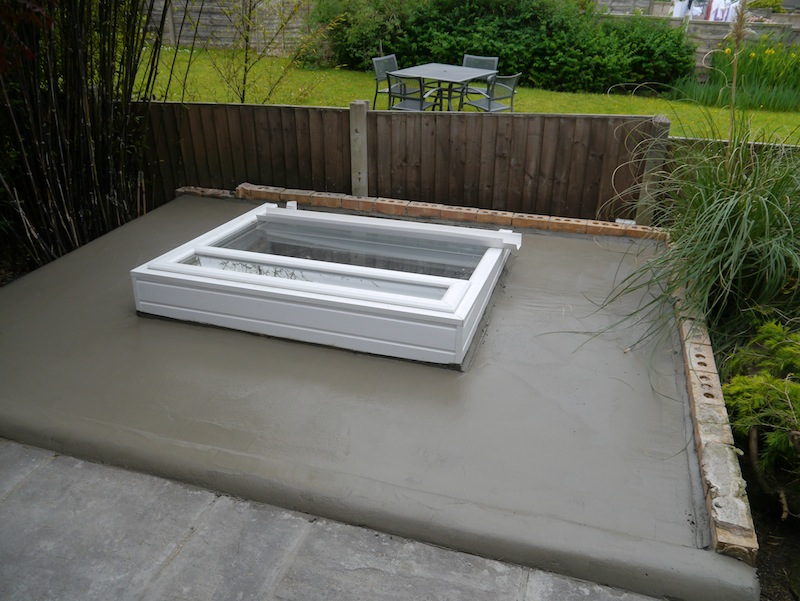 The acrylic brush boxes allow me to check the amount of mechanical debris being trapped. 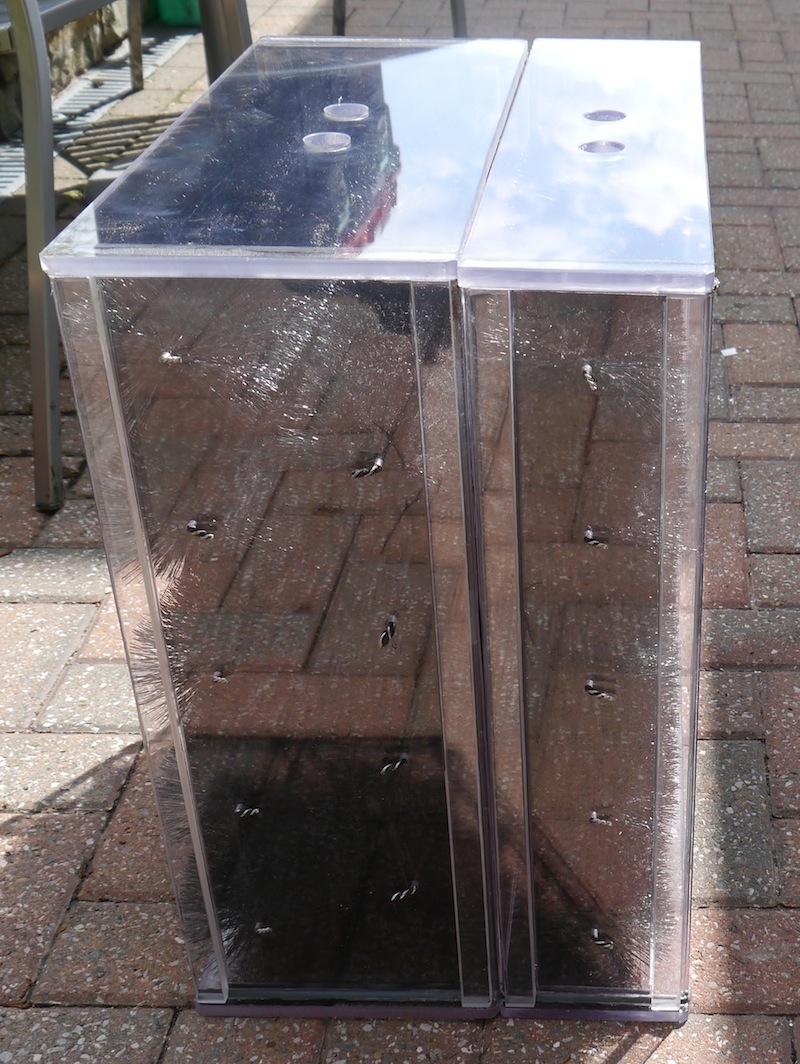 Right now I can’t begin to explain the complexities of all the pipelines but it will all be explained later. 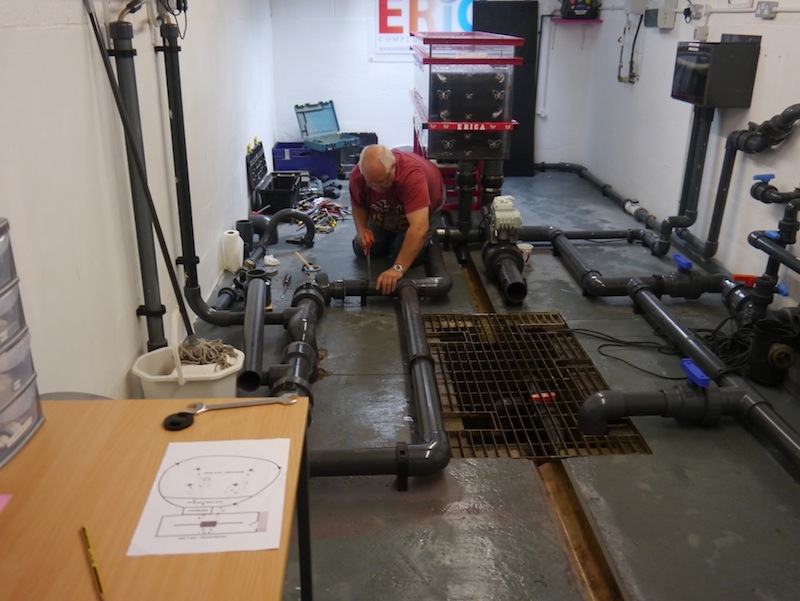 This is how the finished pipeline assembly looks now, but once again, if we’d had the choice of where to put the incoming drain lines, this large pipe assembly would have been tiny in comparison. 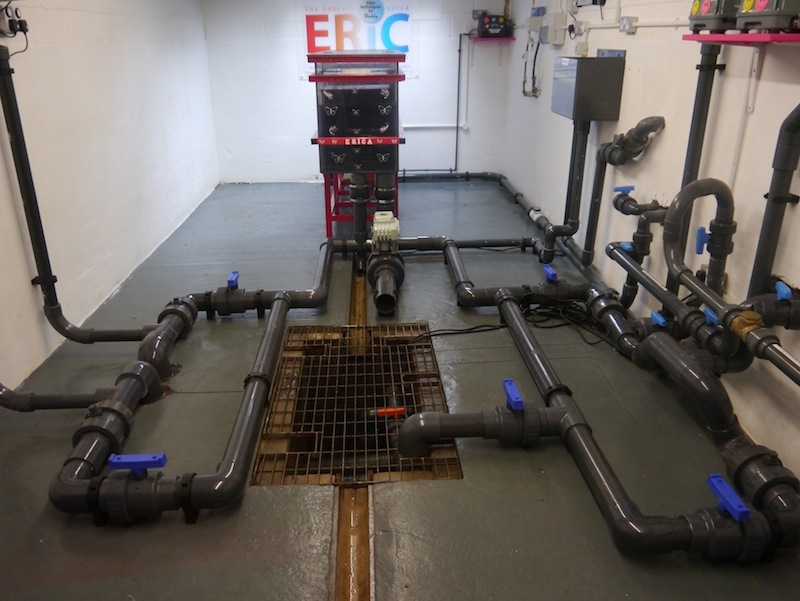 This pipeline assembly allows me to do exactly what the Japanese Koi breeders do on a daily basis.

I can purge the four drain lines directly to waste so that any debris collected by the drain sumps can be removed before it even reaches the filter.

Remember before – the old filter house looked like this – 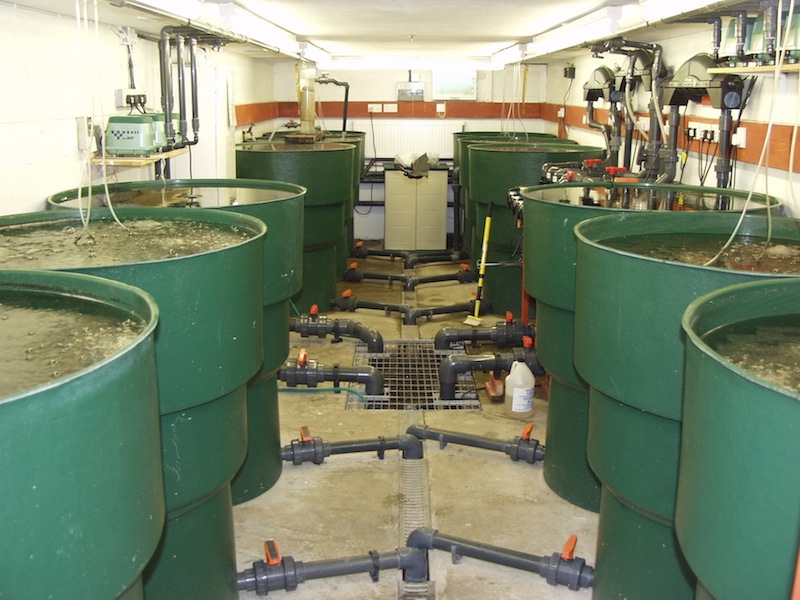 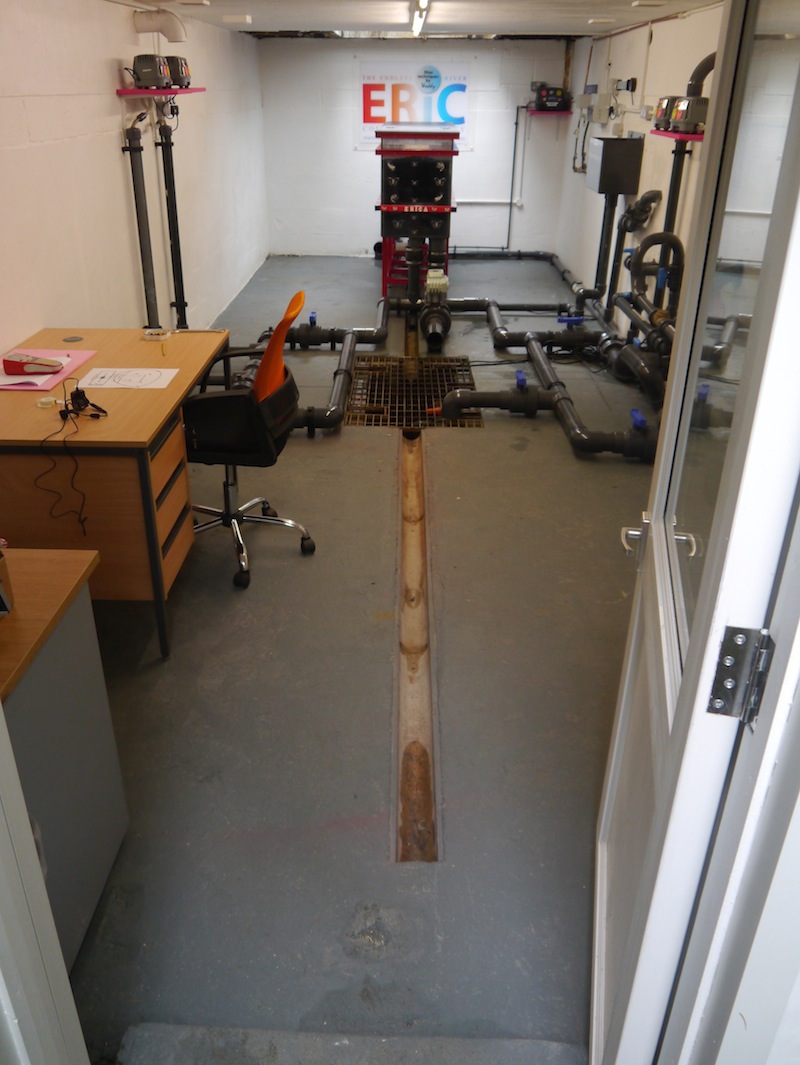 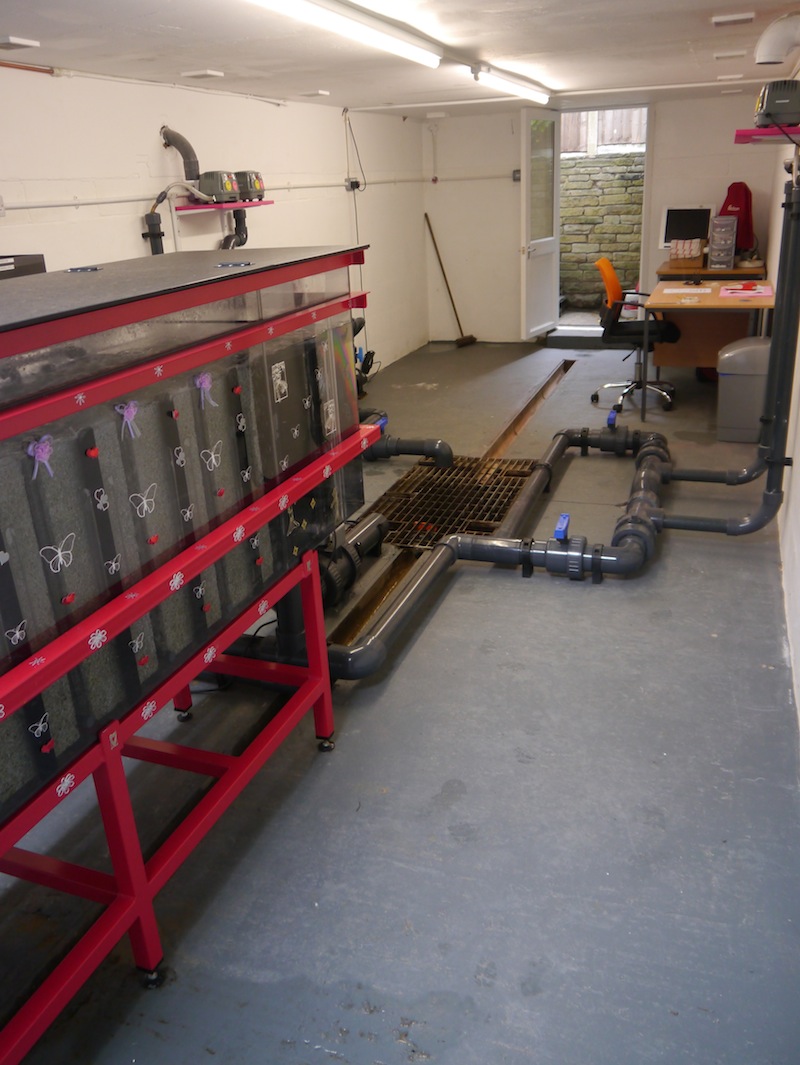 Right now I need more photographs and videos, but the system has now been running with Koi for two weeks and on the 14th. July, several Koi enthusiasts are coming to see it for the very first time. 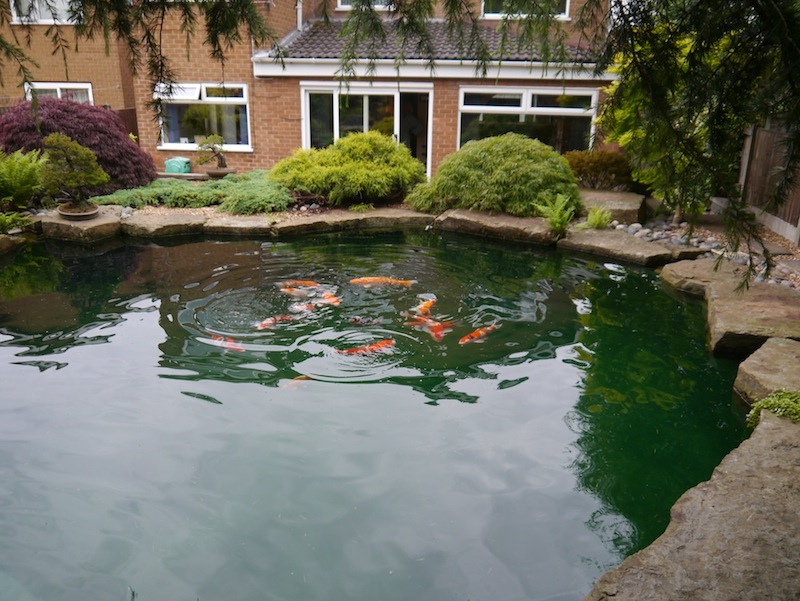 A reminder, this project revolves around ONE single, stand-alone ERIC filter system that is able to provide (hopefully) perfect mechanical and biological filtration to a pond volume of 16,400-gallons with four independent bottom drain lines.

Now, please pause and think about this.

Bear in mind I have been watching it closely for the last two weeks, so right now, I have NO doubts about this being successful and if I’m correct it will –

Yesterday I opened up the total pond system for all to see for the first time.

Most of the visitors attending were dedicated enthusiasts who have been keeping Koi for quite some time, and some traveled significant distances to attend the event.

The weather was extremely kind to us and some of the banter was hilarious. 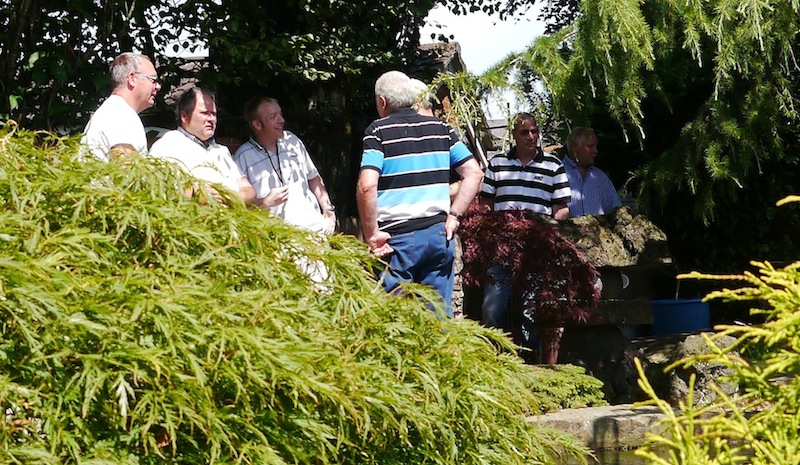 When all were in attendance, we went into the filter house where I demonstrated the full cleaning process. 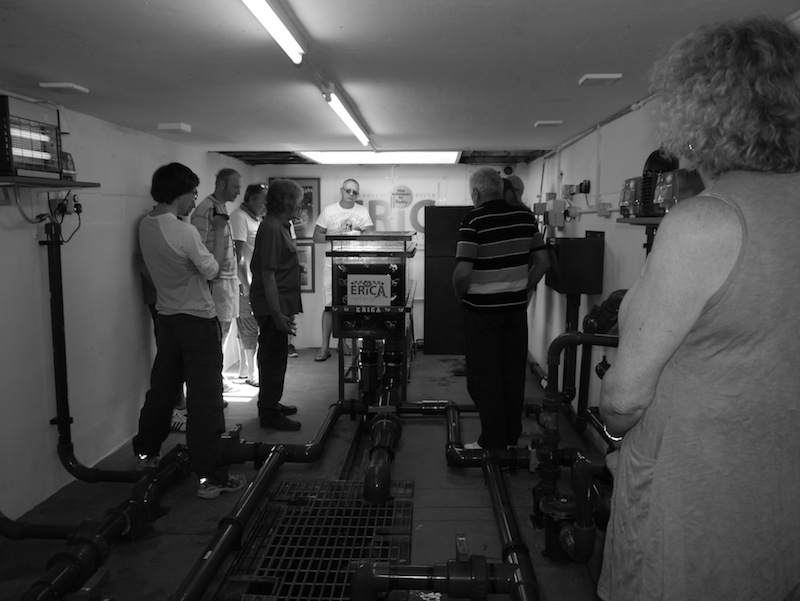 Nothing could be hidden from view, as the entire filter is clear acrylic.

After I had dumped the filter completely we removed the brush box and all the cartridge blocks to prove that nothing remained inside. 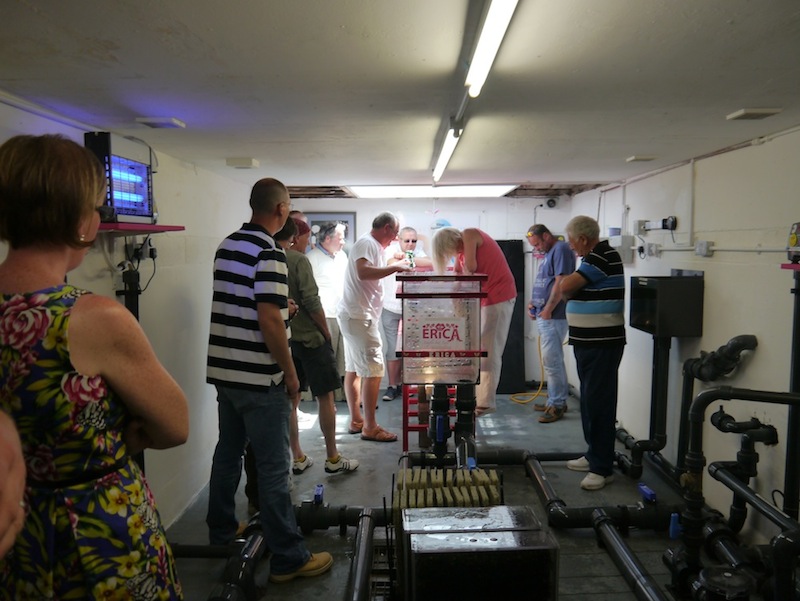 Be assured, nothing remained inside! 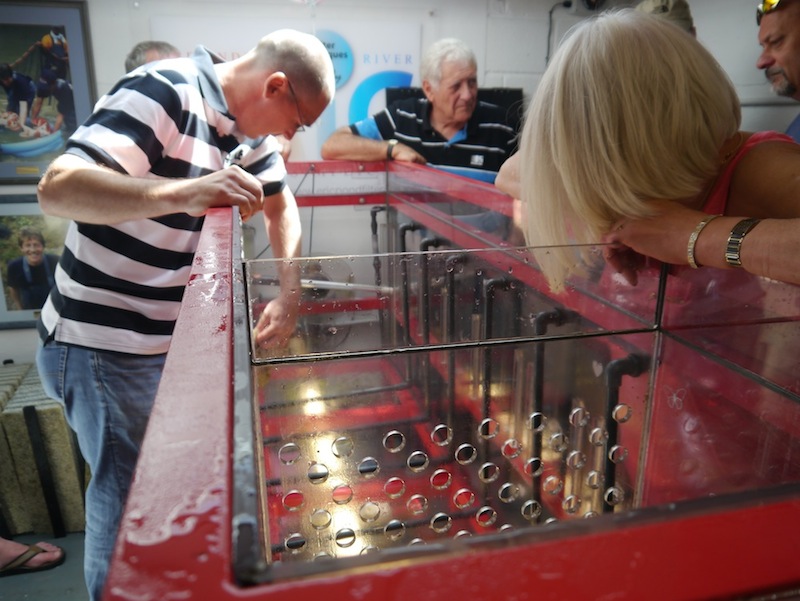