For many months I’ve wanted to change my existing filter system for ready-made Eric units so I can demonstrate them to others by inviting them to see the finished installation and explain how they operate.

Trouble is, it’s not the installation of the Eric unit’s that’s the problem, the problem is removal of the existing units.

To explain, this is a shot of the pond taken from the roof of the filter house. 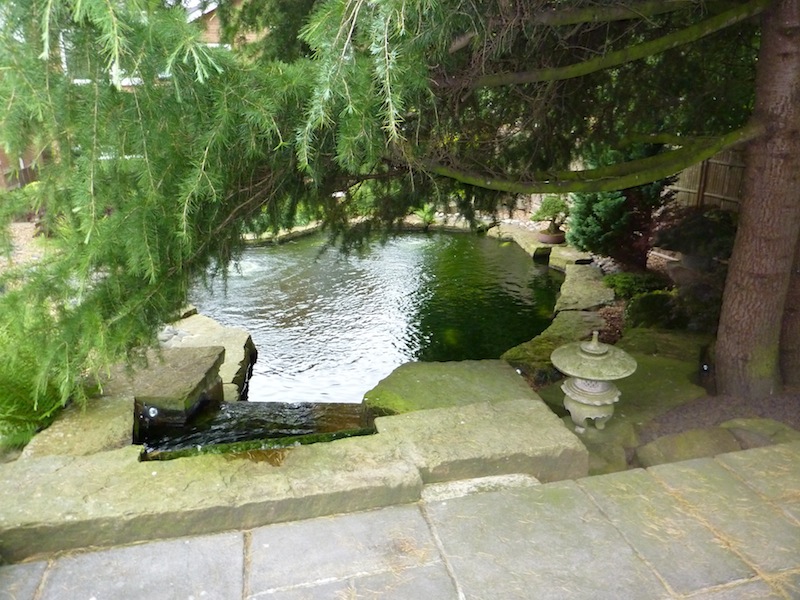 This is a shot of the entire roof of the filter house. 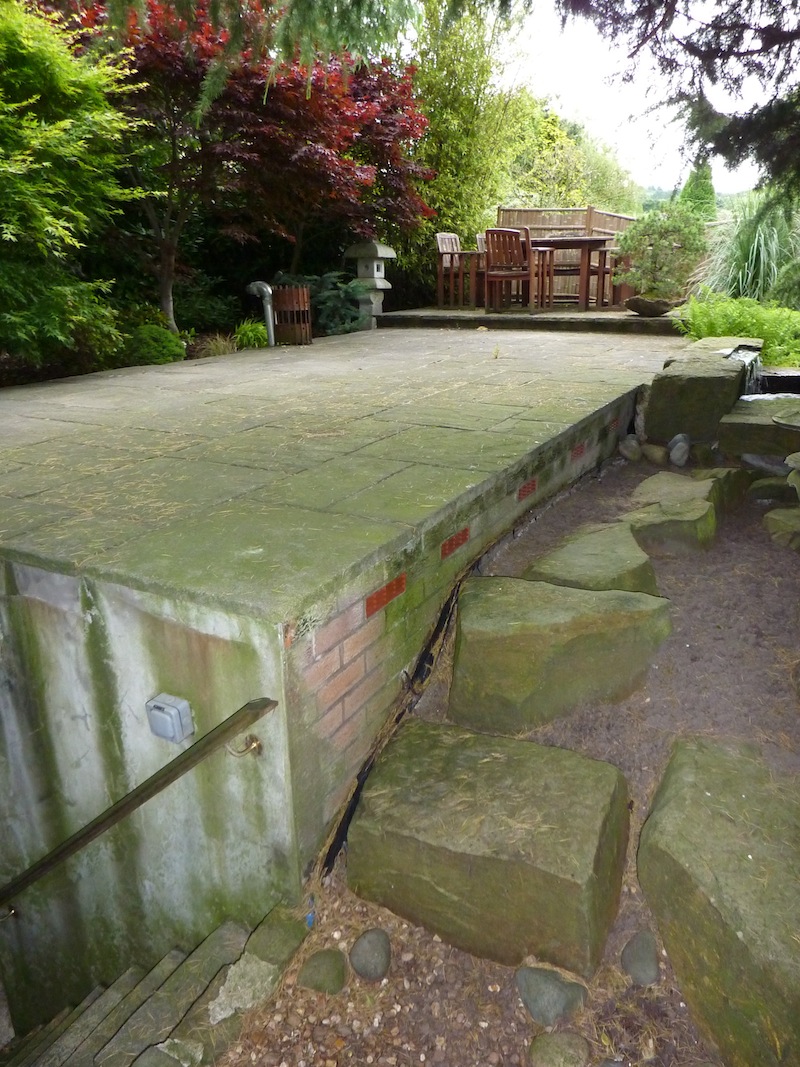 These are the access steps to the filter house. 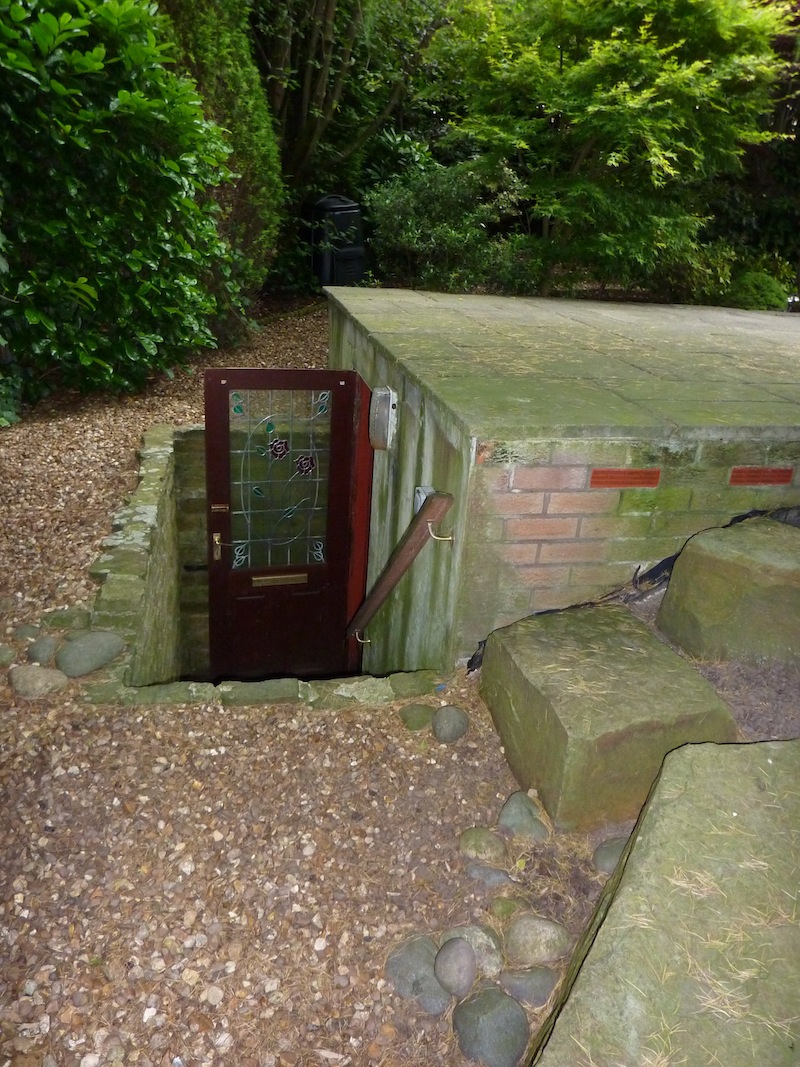 And this is how it looked inside some four weeks ago just before the demolition team moved in. 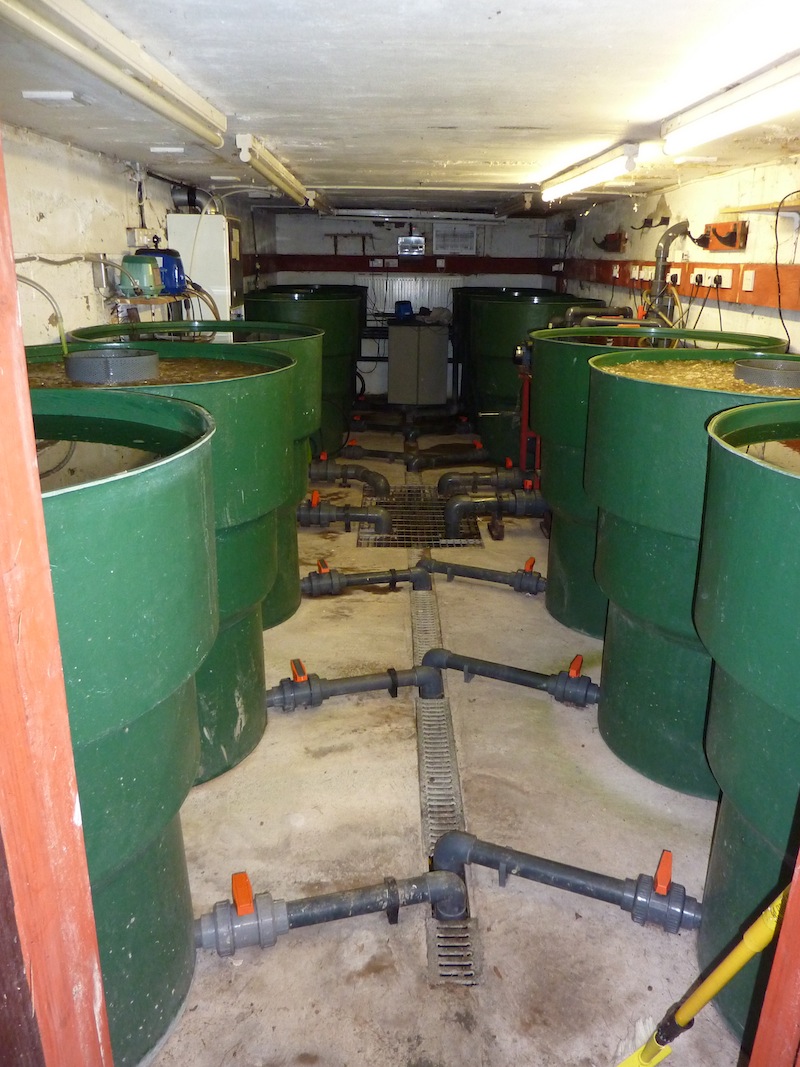 To explain, there are four banks of three ‘9140 units’ I designed back in 1990 and each bank is fed by one of the four bottom drains in the pond to demonstrate the ‘One Drain to One Filter to One pump’ principle I have advocated for many years now.

These units have filtered the 17,500-gallon pond since start-up back in September 1999.

Each unit is linked to the next on a tangent with water transferred from the top centre of each. The units are 40” in diameter and stand 49” tall; all bases are steeply coned to a 2” ball valve for discharge.

The prime unit is simply a vortex unit whilst the two biological stages operate with tailored Japanese filter mat cartridges that are 9” deep. 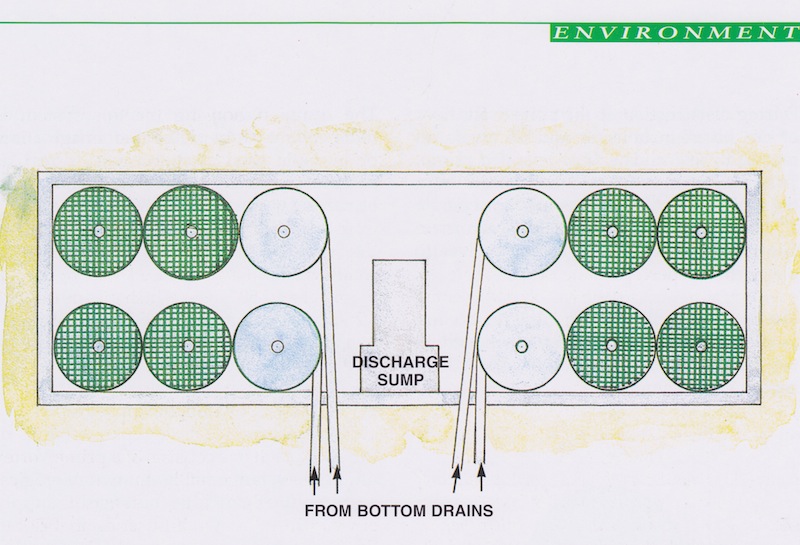 The system was designed in ’92 and here is the illustration of it that was shown in ‘Koi Kichi’ in 1995, which will give an idea as to the space taken up with the 12 units. After the system had been running for 4 years with the filter mat cartridges I was asked to trial K1 media in two of the banks.

These units were far too good to throw away and so I sold them for a give-away price together with all the other items. However, the only ways of getting them out of the room was either to cut out the door and some of the wall where the steps are or remove a section of the roof of the housing.

I opted for removal of a section of the paved block and beam roof which involved some blasts of the Kango hammer and this is the result on top of the roof and the inside of the housing after the filters had been lifted out. 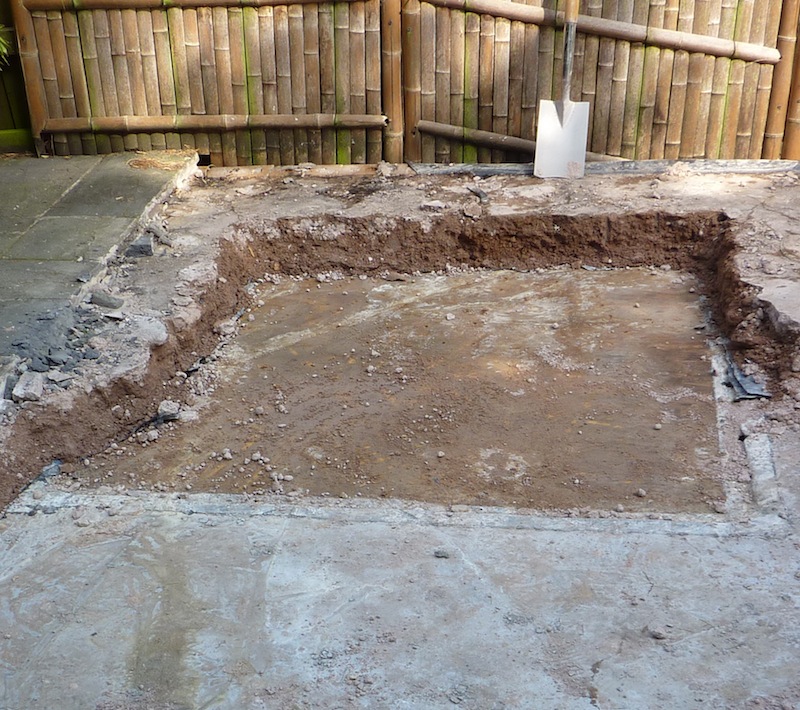 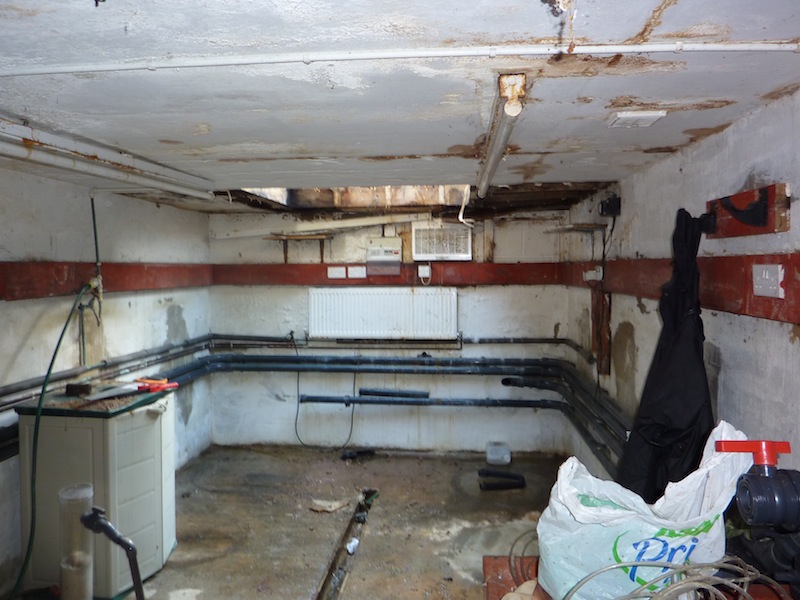 I waved a fond farewell to the old filters as they were taken away for delivery to the new owner. 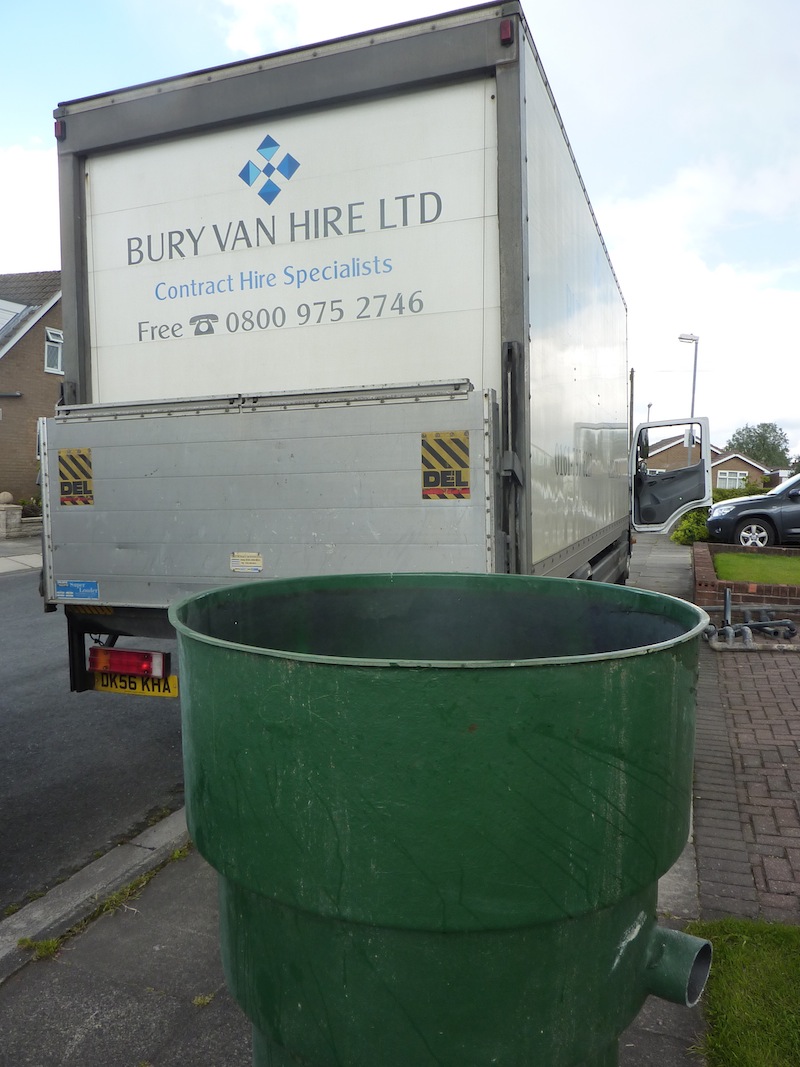 With everything out of the way, the next job is to prepare the housing and bring it back to showroom condition before delivery of the Eric units and this is the plan of how it should look on completion.

The space savings here are obvious for all to see; more to the point there is no need at all for a filter house as such. However, seeing as the house is already there it will make a perfect all-year round building to display the units in.

These are standard Eric Four units with a 30” long extension box to house the Messner Eco-Pro 2000 water pump plus an 80lpm air pump for the bottom drain and a 120lpm air pump to power the filter.

The air pumps are protected from flooding by way of 3/8” non-return flap valves in the event of a power failure and the filters are fitted with a 2” flap valve to prevent back siphoning during discharge.

All items will be plumbed in with union fittings for easy removal and everything will be neatly concealed out of sight in the extension box.

Pictures will be posted of these extension boxes later. 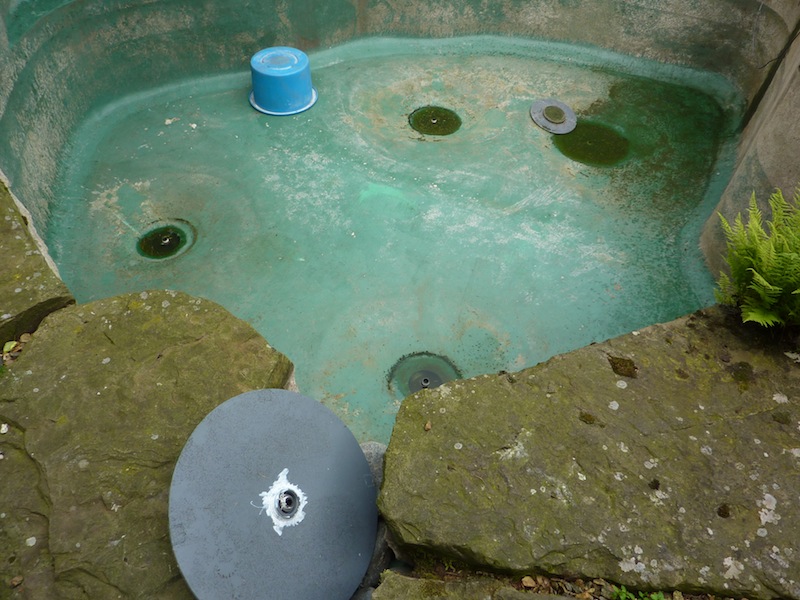 As to the pond itself, nothing actually needs ‘mending’ but whilst the opportunity is here I will replace the diffuser tops to the four bottom drains.